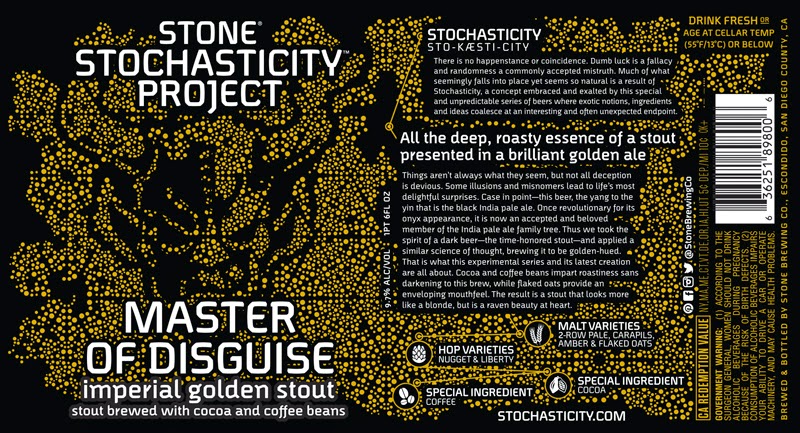 Press Release:
ESCONDIDO, CA (Nov. 17, 2014) – Beer enthusiasts, prepare for a mind- and palate-defying experience that may change some of your preconceived notions about beer. The latest Stochasticity Project release will challenge the assumption that pale-colored ales are modest in body, or that only dark-hued beers can exhibit roasty, chocolaty and rich malty notes. Beginning today, Stochasticity Project Master of Disguise, a so-called imperial golden stout brewed with coffee beans, cocoa and coffee beans (not a typo), will start arriving in 22-ounce bottles and on draft to select markets nationwide.

The inspiration for this beer was twofold: First, after brewing Stone 11th Anniversary Ale (a black IPA now known as Stone Sublimely Self-Righteous Black IPA) in 2007, it was joked that Stone should brew a golden stout. Then, on April Fool's Day 2010, Stone CEO and Co-founder Greg Koch and BrewDog Co-founder James Watt teased fans with a fictional, oxymoronic collaboration beer that was pale in color but had all the classic flavors of an imperial stout, calling it BrewDog/Stone Luciferin Golden Imperial Stout. Having tucked away the concept for that far-fetched beer, Stone Brewmaster Mitch Steele finally decided to make it a reality by developing a pilot batch recipe featuring ingredients that contributed roasty flavors and a pale color.

“To achieve the qualities of a stout, we relied on our prior experience brewing with coffee to pull flavors from the beans without affecting the hue of the beer,” explains Steele. “As the beer warms and opens up, the chocolate adds another level of complexity and helps build the traditional flavors typically associated with dark beers. It’s been really fun to see a prank with questionable viability become a reality.”

To give the beer the silky-smooth mouthfeel that is often associated with stouts, flaked oats were added to the grain bill along with Carapils, English amber and pale malts, which lent the beer a golden-colored hue. Sheets of cocoa from ChocoVivo were added in the whirlpool along with Ryan Bros Coffee, with an additional small amount of coffee added post-fermentation to replicate the typical deep, roasty, chocolaty character found in stouts. Giving off a mild spice flavor and strong bitterness, both Liberty and Nugget hops offer a perfect balance to the overall robust malt flavors. Upon first sip, fans will savor all the rich complexity of a stout presented in the unexpected form of a brilliant golden ale.

Stochasticity Project Master of Disguise is ready to be enjoyed now or may be properly cellared for several months or even years. Over time, the malt qualities will evolve and give way to richer cocoa and coffee flavors. Regardless of when the beer is enjoyed, fans will learn to not judge beer by its color... at least not this one. 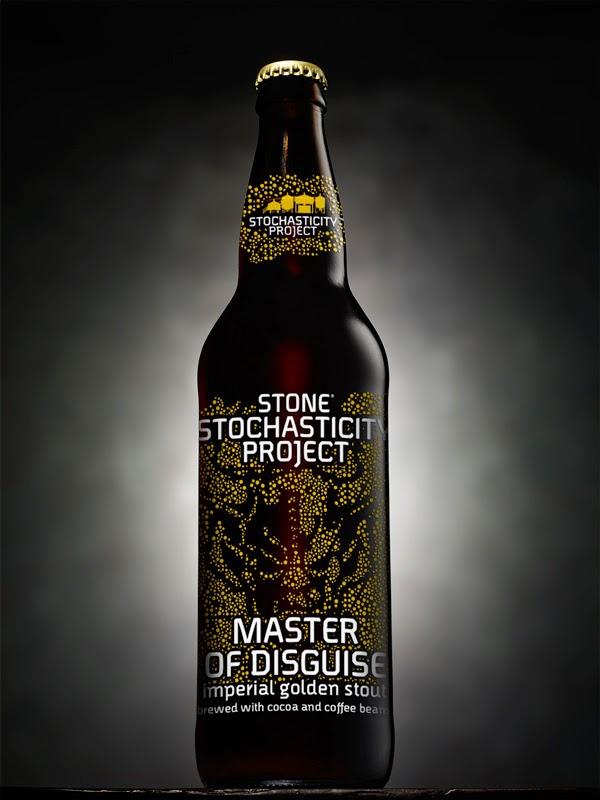