Brewery known for its NW style sour ales hires on a number of new employees, expands location
Press Release:PORTLAND, Ore. – Nov. 20, 2014 – Cascade Brewing announced today the promotion of Kevin Martin to lead blender. Martin, who has been with Cascade since early 2012 and has served as cellarmaster for the past two years, will now oversee putting all sour blends together, including stewarding the live barrels in the brewery’s popular Tap It Tuesday program. 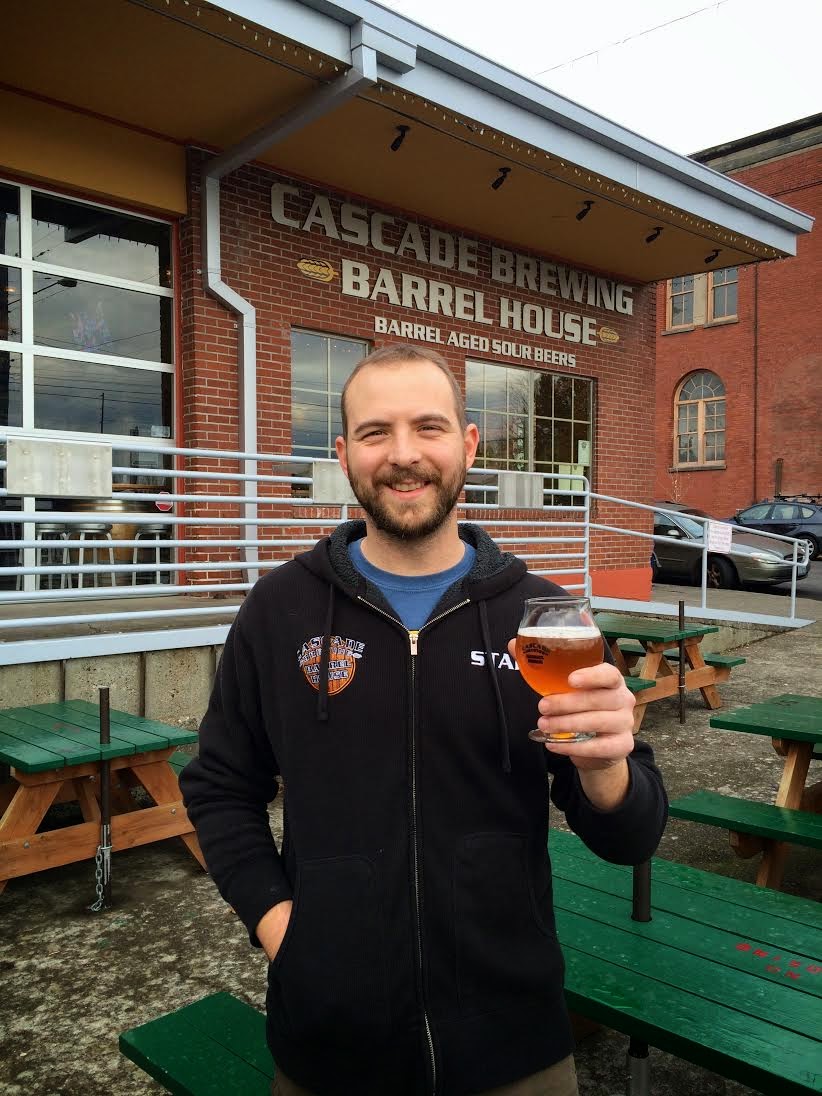 “Kevin has been a huge asset to the blending program at Cascade since taking the reigns,” explained Ron Gansberg, brewmaster and blendmaster for the company. “We are excited to promote him to this position and allow him the freedom to further express his creativity.”As lead blender, Martin will work closely with Gansberg to develop components of each blend, overseeing ratios and percentages and providing creative input. He will also steward the blends for Tap It Tuesday, a weekly event at the Cascade Brewing Barrel House that features exclusive one-off limited blends from the cellar, with the contribution of Cascade personnel.

Martin got his start in the wine industry in 2007, working multiple harvests in a number of wineries. A homebrewer, he chose to segue into beer and attended the American Brewers Guild Intensive Brewing Science and Engineering program from 2011 to 2012. Originally from Lancaster, Penn., he came to Portland for its vibrant beer and wine culture, securing a brief internship with Laurelwood Brewing Co. before settling in at Cascade.Cascade has added a number of other recent new hires as well, including Mike Starzec as general manger of the Cascade Brewing Barrel House; Robby Roda as director of sales, distribution and marketing; and Chris Doggett as senior accountant.Starzec, who originally hails from Anchorage, Alaska, oversees all operations at the Cascade Brewing Barrel House at 939 SE Belmont St. He has worked as a restaurant manager in Portland for the last 15 years, with the last six years focused primarily in brewpubs. Most recently he spent five years managing the Deschutes Brewery Portland Public House.

Roda, a Portland native, oversees all accounts in the Northwest, as well as acting as the liaison with Cascade’s national distributors and helping grow the brand. He most recently worked in sales with Incline Beverages, a craft beer distributor in Southern Calif. He has also worked with a number of beer bars and breweries in Calif., including The Bottle Room in Whittier, Monkish Brewing In Torrance and Golden Road Brewery in Los Angeles.

Doggett is a native Oregonian who graduated from Portland State University with a Bachelor of Science degree in accounting. Doggett manages all in-house accounting, and is also overseeing the company’s transition to new ERP software. He has previously worked at Xerox and SDRI.
Cascade Brewery, which makes a number of traditional style ales but is known worldwide for its NW sour style beers, has recently expanded into a 23,000 square foot warehouse in SW Portland that will headquarter all of its blending, aging, packaging and distribution. The Cascade Blending House currently holds 1,300 barrels filled with its sour beer, plus an additional nine foudres (giant wooden barrels that typically hold around 1,800 gallons of beer). The company is in the process of moving all operations out of the Cascade Brewing Barrel House; in the near future, it will expand that space into a larger pub and tasting room.About Cascade BrewingEstablished in 1998, Cascade Brewing is a pioneer of the NW style sour beer movement. Under the ownership of Art Larrance and the direction of brewmaster Ron Gansberg, the Portland, Ore. brewery eschewed the “hops arms race” of the Northwest and instead chose to focus on sour ales, employing local fruit and barrels from the region. Today they have grown from several oak wine barrels to more than 1,300. They also produce a number of non-sour beers in their SW Portland brewery. Cascade Brewing has two pubs, the Raccoon Lodge and Brew Pub in SW Portland (www.raclodge.com) and the Cascade Brewing Barrel House in SE Portland (www.cascadebrewingbarrelhouse.com). The brewery currently distributes its bottled sour beers in Oregon, Washington, California, Florida, Massachusetts, North Carolina, Pennsylvania, and New York.  For more information, visit www.cascadebrewing.com.
Posted by Adam Duerfeldt at 5:23 PM