Lompoc Brewing Teams Up with MLS Legends for Fundraiser

PORTLAND, Ore. – Portland soccer legends John Bain and Timber Jim are joining with Lompoc Brewing for a Portland Timbers viewing party and silent auction to raise funds for the West Side Timbers Premier Soccer Club U13 Copa; the youth soccer team recently won the Oregon State Cup and is now heading to New Mexico to participate in The US Youth Soccer Far West Regional League June 16 through 22. The fundraiser will take place on Saturday, May 24 from 3 to 6pm at Lompoc’s Fifth Quadrant patio and brewery, 3901 N Williams Ave.
A silent auction will begin at 3 pm and feature various soccer memorabilia, MLS items, Adidas merchandise and brewery packages. All monies raised at the silent auction, as well as the majority of beer sales during the event, will be donated directly to the team to help offset travel expenses.

The Portland Timbers vs New York Red Bulls game will be show from 4 to 6pm on a big screen on the patio (and in the brewery for those over 21). Just prior to kick off, Lompoc Brewing will present the Timbers Army 107ist with a donation from the 2013 season sales of Kick Axe Dry Hopped Pale Ale; Lompoc Brewing donates $5 from every keg sold. This year’s funds will be directed to Operation Pitch Invasion for a new field at Jefferson High School.

A Portland staple since 1996, Lompoc Brewing creates seven flavorful year-round beers, plus a ridiculous number of seasonals. You can find Lompoc in 22 oz bottles and on draft at locations around town, and at its five neighborhood pubs: Fifth Quadrant and Sidebar in North Portland, Lompoc Tavern in NW, and Hedge House and Oaks Bottom in SE. For more information, visit www.lompocbrewing.com.
Posted by Adam Duerfeldt at 5:47 PM No comments: 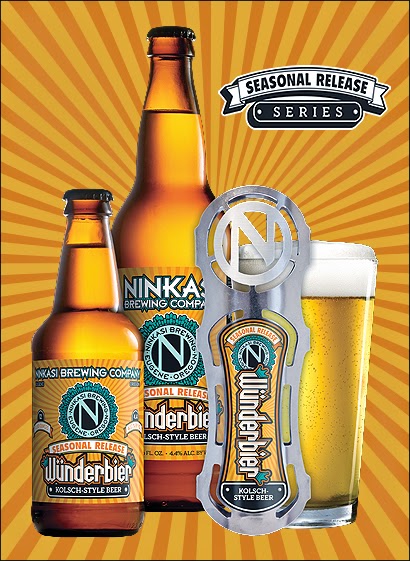 Wünderbier is Available in Bottles and On-Draft June Through August

EUGENE, Ore.—May 19, 2014— With warmer months and endless adventures ahead, Ninkasi Brewing Company aims to help craft beer admirers appreciate summer even more with the release of Wünderbier to its Seasonal Release Series. A Kölsch-Style ale, Wünderbier is perfect for summertime enjoyment, offering a beer that is crisp, sweet and luminous.

Brewed in the traditional fashion, Wünderbier ferments at ale temperatures and is conditioned at colder lager temperatures, giving this golden-colored beer a subtle, crisp sweetness with a light flavor. Wünderbier has a light body and a dry yet crisp finish, offering a beer that is a balanced and sessionable.

“This Kölsch-style beer is perfect for chilling with friends,” says Jamie Floyd, founding brewer and co-founder of Ninkasi. “Crisp, delicate, bright, and light this beer allows us to enjoy each other’s company without distractions and is an exceptional pairing to summertime fare.”

Available for the first time, Wünderbier can be found in 12 and 22-ounce bottles and on-draft June through August.

Description: Conquer summer with Wünderbier in-hand and say “cheers” to the pure and unadulterated fun of the season. In tribute to the favored beer of Cologne (Köln), Germany, this German-Style Kölsch is golden-colored with a subtle, crisp sweetness. A wonderful summer story awaits in every sip; it’s Wünderbier!

Tasting Notes: Fermented at ale temperatures and conditioned at colder lager temperatures, this golden-colored beer has a subtle, crisp sweetness with a light flavor. With a light body and a dry yet crisp finish, this beer is a balanced and sessionable, perfect for summertime enjoyment!