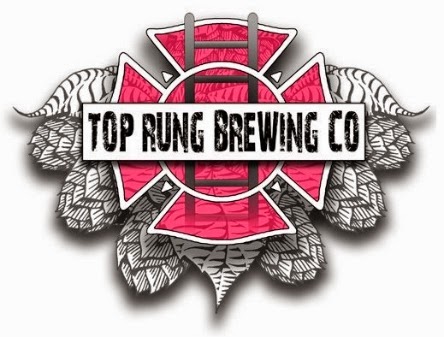 Press Release:
January 14, 2015
On January 17th Top Rung Brewing will release their ninth beer since opening in April 2014. The Lacey Dark Lager will be released in the tap room and then available through distribution. The Lacey Dark Lager is an easy to drink, session able dark lager featuring Pilsner, Munich, Black Prinz, and Midnight Wheat for the grain bill and Sterling hops. O.G. of 1.060. ABV – 5.8%, IBU – 27.
This beer celebrates our home town and recognizes the fine hard working people of Lacey. 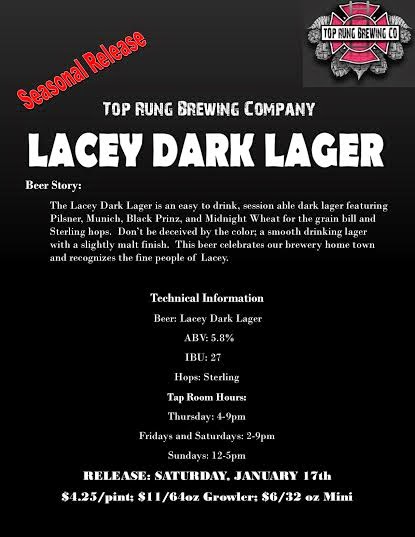 Posted by Adam Duerfeldt at 12:36 PM No comments:

“We believe these new partnerships in Oregon and Washington will be the best thing for our company, our retail partners and our Ninkasi fans in the region,” explains Nikos Ridge, CEO and co-founder of Ninkasi. “We are committed to being an independent and locally-owned craft brewery, and feel we will be better aligned long term with independent and locally-owned wholesalers.”

“Our Bigfoot team is excited to partner with Ninkasi; a premier local craft brewery poised for continued growth who also shares many of our same corporate values and beliefs,” adds Eric Forrest, co-president of Bigfoot Beverages. “It’s a tremendous opportunity to pair local craft with local distribution while creating more jobs in our communities.”

“This renewed partnership, in one of America’s most dynamic beer markets, further demonstrates the commitment that both parties have towards selling and marketing better beers,” cites Adam Hilpert, The Odom Corporation CRO.

Established in 2006, Ninkasi is the 30th largest craft brewery in the United States and continues to be an independent company based in Eugene, Ore. The brewery also operates its year-round Beer is Love donations program, offering assistance to non-profits throughout all the states where Ninkasi beers are sold.

Learn more about Ninkasi at www.ninkasibrewing.com.

Posted by Adam Duerfeldt at 2:57 PM No comments:

One of the best venue's for a brewfest that Emily and I have ever been to, The Oregon Garden has changed its Oregon Garden Brewfest to Father's Day. See media release below.

SILVERTON, Ore. — The Oregon Garden has announced a new date for its popular Oregon Garden Brewfest, presented by Growl Movement. The 11th annual event, traditionally held in the spring, will take place June 19 through 21 this year, coinciding with Father’s Day. The popular Willamette Valley festival will feature 130 handcrafted beers, ciders and mead from more than 65 different breweries from across the nation. Event hours are Noon to 11 pm Friday & Saturday, and Noon to 5 pm Sunday.

“We have moved Brewfest to June in hopes of better weather and to more fully showcase the beauty of the Garden,” said Brittney Hatteberg, regional marketing manager for The Oregon Garden. “We encourage guests to grab a beer and take it with them as they explore our 80-acres, and by mid-June the Garden will look spectacular.”

Located in the historic town of Silverton, just an hour’s drive from the Portland metropolitan area, the Oregon Garden Brewfest also features live music from a dozen regional bands on two stages, local food, and a Brewer’s Tasting Dinner. The Oregon Garden Brewfest is for ages 21 and over on Friday and Saturday; minors are welcome all hours on Sunday.

Admission ranges from $15 to $50, but all admission packages include a souvenir tasting glass and a number of tasting tickets; see ticket pricing and purchase in advance at https://www.eventbrite.com/e/oregon-garden-brewfest-2015-tickets-13448706443.

A full glass of beer costs four tickets, and a taster costs one ticket. Additional tasting tickets may be purchased for $1 apiece. Designated drivers pay a cover charge of $5 and receive a bottle of water. Parking at The Oregon Garden is $5 per car; free shuttles are available from various locations in Silverton.

The fourth annual Oregon Garden Brewer’s Tasting Dinner will take place on the eve of the festival, June 18 at 7 pm. This six-course dinner, which features small plates paired with local beers from six area breweries, is attended by participating brewers, industry insiders and a few lucky beer aficionados; a limited number of tickets will be made available to the public this spring.

The ideal way to enjoy the Brewfest is to book a room at The Oregon Garden Resort, a Moonstone Hotel Property located just steps away from the festival. Brewfest Packages starts at $239 and include accommodations, two 3-day admission passes to Brewfest (each pass includes a tasting glass and five tasting tickets), a food voucher for the Oregon Garden Resort’s food booth, a continental buffet breakfast and admission to The Oregon Garden. Packages can be booked at www.oregongardenresort.com/Packages.htm or by calling 503-874-2500.
The Oregon Garden Brewfest is presented by Growl Movement and sponsored by Venti’s Café, Wave Broadband, Pepsi and The Oregonian/Oregon Live. For more information about the event, visit www.oregongarden.org/events/brewfest/.

Posted by Adam Duerfeldt at 2:00 PM No comments:

ESCONDIDO, CA (Jan. 12, 2015) – At Stone Brewing Co., collaboration beers are looked at as an opportunity to get creative, experiment well beyond day-to-day brewing parameters, and utilize unique techniques and ingredients—all while celebrating the spirit of craft beer camaraderie. These beers are rarely brewed again, but in a gesture to outspoken and engaged craft beer fans, Stone is revisiting a particular collaboration that was first brewed in 2011 with Guam’s Ishii Brewing Co. and Japan-based Baird Brewing Company. Baird / Ishii / Stone Japanese Green Tea IPA is brewed with Japanese sencha green tea and five different hops, including Sorachi Ace, a varietal originally developed in Japan. Starting today, the IPA will begin arriving in 22-ounce bottles and on draft at restaurants, bars and retail outlets in markets where Stone beer is sold.

After the 2011 Japanese earthquake and tsunami, Toshi Ishii, the owner of Ishii Brewing Co. and a former Stone Brew Crew intern, contacted Stone CEO and Co-founder Greg Koch to propose collaborating on a beer that would raise funds for recovery efforts (a total of $64,000 was donated to the Japanese Red Cross Society as a result of the project). Koch discussed the collaboration with Stone President and Co-founder Steve Wagner and Stone Brewmaster Mitch Steele, and suggested Bryan Baird of Baird Brewing Company as the third collaborator, since he had met and visited Baird’s brewery in Japan a few years earlier. Steele, Ishii and Baird decided to harness the Japanese food culture’s affinity for tea by brewing an IPA that would feature green tea from Japan.

“This beer was beloved when it was first released, but due to the hop availabilities and creative nature of collaborations, we decided to swap out the original beer's now very rare Pacifica hops from New Zealand for Helga hops from Australia,” explains Steele. “We brewed exactly the same recipe, targeting the same original gravity; however, since we’ve improved our brewing and fermentation processes, the alcohol by volume rose from 9.2 percent to 10.1 percent. The result is a heftier beer that perfectly highlights the earthy spice flavors that the Japanese green tea provides.”

The beer has a massive hop presence, both in flavor and bitterness. It was dry-hopped twice, first with Aramis, Crystal and Helga, all of which contribute spice notes and the aromas and flavors of mango and pineapple. The second dry hop consisted of Sorachi Ace hops and the Japanese green tea addition. Sorachi Ace provides lemon and dill flavors, while the tea provides dry, herbal and, understandably, rich green tea notes. With a mild barley character thanks to the exclusive use of pale malt, the brewers were able to highlight a hop profile that’s harmoniously paired with distinct green tea qualities.

To fully enjoy the seamless marrying of hop and green tea flavors, Baird / Ishii / Stone Japanese Green Tea IPA should be enjoyed as far ahead of the beer’s “enjoy by” date (stamped on the bottle neck) as possible. Those who savor the bright, herbaceous and bitingly hoppy IPA will understand why this crowd pleaser was revived for a second go-round.

Posted by Adam Duerfeldt at 7:29 PM No comments: