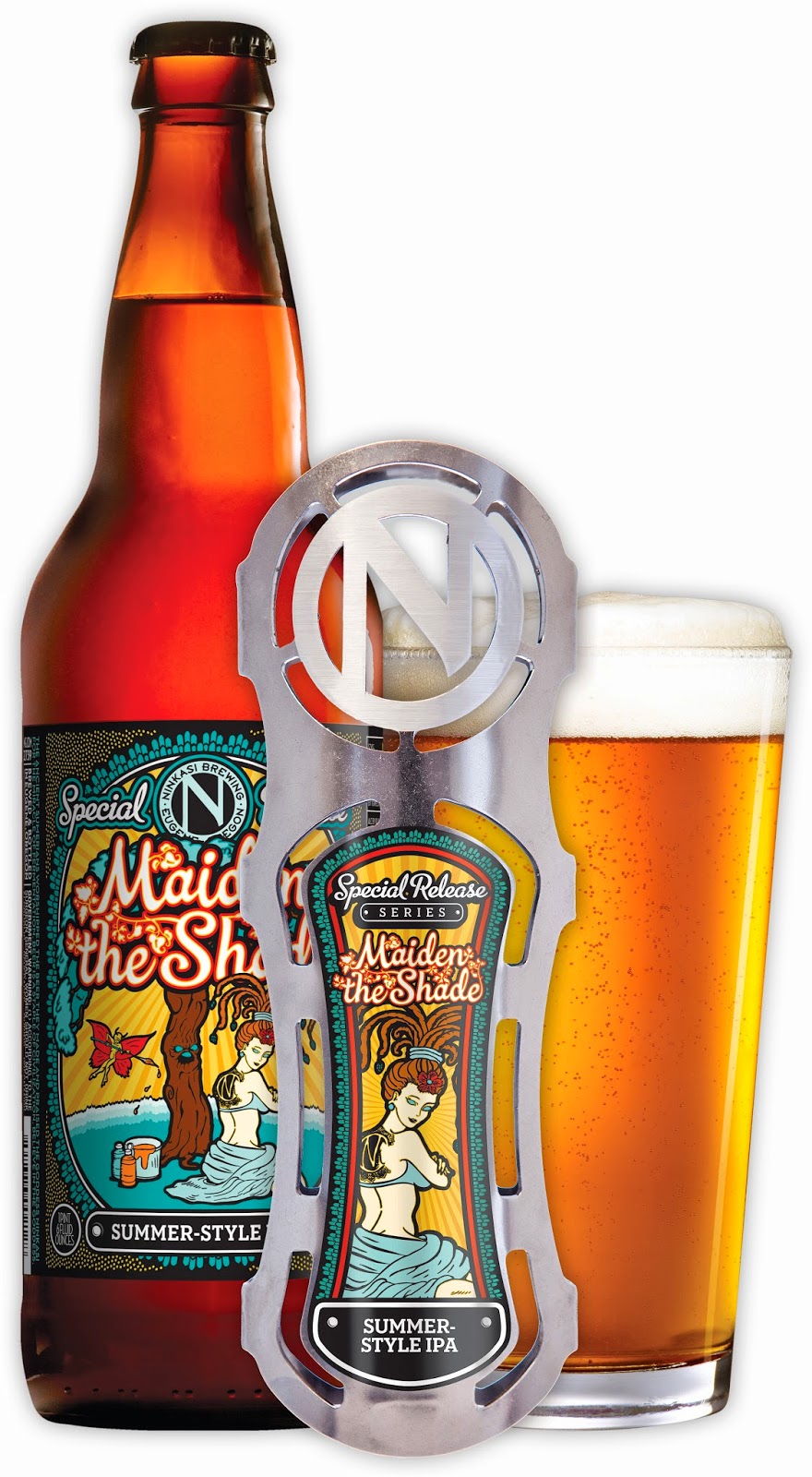 EUGENE, Ore.—May 8, 2014—Nothing marks the return of summer like the release of Maiden the Shade from Ninkasi Brewing Company’s Special Release Series. Officially released for the first time in 2009, this summer-style India Pale Ale has quickly become a summer favorite at the brewery and for those who worship the return of warmer months and outdoor adventures.

“This beer is for summer festival fun and, more specifically, in celebration of the Oregon Country Fair held just outside of Eugene,” explains Jamie Floyd, founding brewer and co-founder of Ninkasi, discussing a festival that inspired the creation of Maiden the Shade. “It’s about enjoying summer with friends and family with a special, hoppy treat made just for the occasion.”

This year, Maiden the Shade fans can look forward to a bigger, bolder hop profile. “We bumped up the front hop perception and aroma this year to give it even more delicious flavor,” says Floyd. Brewed with eight different hop varieties, this beer has an even bigger, more flavorful hop profile that is as delicious as much as it is smooth.

Maiden the Shade can be found in 22-ounce bottles and on-draft May through August.

Description: In salute to the playful side of summer, we had fun with this beer! Maiden the Shade has a big, robust hop character from the liberal use of seven different hop varieties. It’s completed with a light-colored malt backbone to stay in balance. Kick back and enjoy!

Tasting Notes: This beer has been dubbed a summer IPA. Big powerful combinations of many different kinds of hops give a big hop profile. We added flaked barley to the beer to make for the smooth body and lighter summer-style IPA. Another Ninkasi cult favorite! 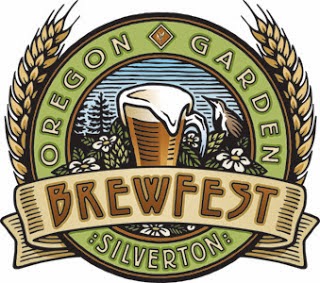 SILVERTON, Ore. — The 10th annual Oregon Garden Brewfest enjoyed vigorous crowds at this past weekend’s event, with 7,500 beer lovers in attendance despite rainy spring weather. Beer lovers came from all over the Northwest to sample from 130 handcrafted beers, ciders and mead, and to enjoy live music from a dozen regional bands.

“Oregon is known for its craft beers and ciders, but most of the big festivals celebrating them are in Portland, Eugene and Bend,” said Mary Ridderbusch, event manager. “It’s great to offer a festival in the central Willamette Valley for our neighbors, and at the same time introduce beer lovers from out of the area to the beauty of The Oregon Garden.”

The Oregon Garden Brewfest took place under twinkly white lights in the Frank J. Schmidt Pavilion on the grounds of the Oregon Garden, with spillover in an outdoor tent. Attendees were welcome to stroll through the lush landscaping of the Oregon Garden with drinks in hand. Crowds squeezed together to enjoy the music of a dozen regional bands, including Casey Neill & The Norway Rats and Tango Alpha Tango.

For the second year in a row, the People’s Choice – determined by votes cast at the festival – was Pirate Stout from Santiam Brewing in Salem. Runners up were Rusty Truck Brewing Cherry Chocoholic (Lincoln City, OR) and Cascade Brewing Oblique Black & White Coffee Stout (Portland, OR). Despite a large number of India Pale Ales being served at the event, it was the darker beers that won over the crowds.

Auxiliary events included the third annual Brewer’s Tasting Dinner held at the resort on the eve of the festival. The six-course tasting featured small plates paired with beers from six Northwest breweries. Brewing industry members mingled with craft beer aficionados at the intimate event, which featured a short introduction by each of the brewers about that particular beer prior to it being served. There was also a Brewer’s Brunch presented by Seven Brides Brewing in Silverton on the morning of the festival kickoff. 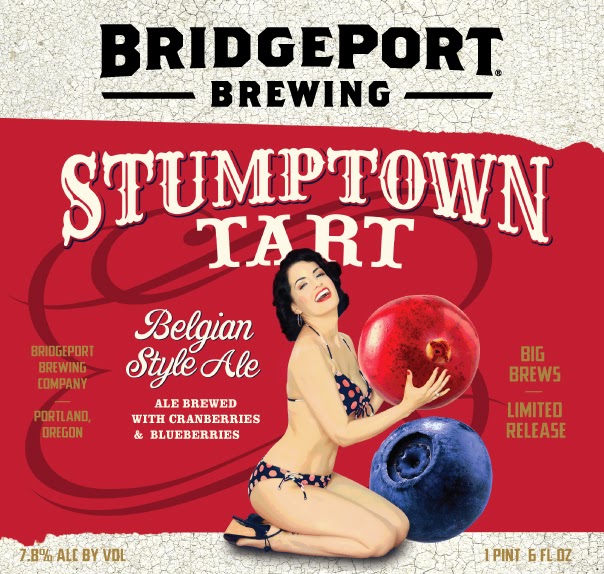 PORTLAND, Ore. – May, 5 2013 – Staying true to its namesake, this year’s Stumptown Tart ups the tart factor with the addition of Oregon cranberries paired with the popular blueberry from last year. Typically reserved for Thanksgiving feasts and brightly colored juice, this is the first time BridgePort has used this Oregon grown berry in a beer. Jeff Edgerton, brewmaster at BridgePort Brewing Company, explains the unusual choice:

“I loved the blueberries in last year’s Stumptown Tart and ever since it came out I’ve been thinking about what would pair well with blueberries again. We played with the tartness of cranberries against the mellow sweetness of the blueberries and the whole brewing staff is pretty pleased with how it turned out.

Trying out new fruit year to year challenges the brewing team and this year’s Stumptown Tart was no different.

“We were surprised about two things when it came to brewing this beer,” commented Edgerton. “The first was that once we combined the cranberries with the base beer, it actually mellowed out the bitter flavor that most of us associate with cranberries. The second was the color. We expected a bright red beer when in fact the skins of the cranberries hardly produced any color leaving the beer light red in color.”

BridgePort will host a Stumptown Tart release party Thursday, May 15 starting at 5:30 p.m. at the BridgePort Brewpub in Portland. Come be one of the first to try this year’s beloved Stumptown Tart. Bottle label model Bernie Dexter will also be there ready to pose with guests for photo opportunities and to personalize guests’ bottles with an autograph. For $1, guests can snag a smooch from the Stumptown Tart herself along with a picture in the kissing booth. All Donations will go to The American Cancer Society.

Description:   Brewed with two row pale malt and malted white wheat, the 2014 edition of this big Belgian-style ale features the crisp sweet and tart balance of Oregon blueberries and cranberries. The hazy brew is double fermented and only lightly filtered to retain the fresh fruit flavor.

Celebrating 30 years in 2014, Oregon's oldest craft brewery continues to evolve from a microbrewery to a regional leader committed to producing high quality craft ales. Lead by Brewmaster Jeff Edgerton, the team of BridgePort brewers prides itself on using hops from an hour away and clear glacial water from Mount Hood. The BridgePort family of ales includes IPA, the Hop Czar IPA Series, and Kingpin.  BridgePort Brewery is located at 1313 N.W. Marshall St.  For more information, call 503-241-7179 or visit www.bridgeportbrew.com.
Posted by Adam Duerfeldt at 3:45 PM No comments: