PORTLAND, Ore. – Jan. 21, 2014 – Ever since Governor Kitzhaber signed “The Growler Bill” into legislation last April, growler fill stations have sprung up all over the Portland metropolitan area, from mini marts and grocery stores to pizza joints and specialty tap houses. The newest kid on the block is Growlers Hawthorne at 3343 SE Hawthorne Blvd.

Growlers Hawthorne will officially open its doors at Noon on Feb. 4, and will feature a weeklong grand opening celebration with nightly “Meet the Brewer” events from 5:30 to 7:30pm featuring exclusive beers on tap from each brewery. The schedule includes Fort George Brewery on Feb. 4, 10 Barrel Brewing on Feb. 5, Oakshire Brewing on Feb. 6, and Firestone Walker Brewing on Feb. 7. The grand opening week will conclude on Feb. 8 with an all-ages party from 3:30 to 6:30pm featuring beer and root beer from Pelican Pub & Brewery and cheese pairings and ice cream floats from Tillamook. Pelican head brewer Darron Welch and his family will join in the celebration.

Growlers Hawthorne is the first dedicated, single purpose growler fill station in Portland. Apart from sample tastings, the store offers no on-premise consumption, instead focusing solely on the growler experience. “We are unique in our single-minded mission,” explained co-owner Lucy Park.  “We are providing a dedicated place where fresh craft beer is sold in a distinctive package at a competitive price in an environmentally friendly way.”

Growlers Hawthorne will offer 40 rotating taps from the cooler, plus eight taps of kombucha and other non-alcoholic beverages from a separate kegerator. At least 10 percent of the 40 taps will be devoted to other craft specialties including braggot. Cider and mead offerings ensure there will always be gluten-free options available. All 64-oz. growler fills will be competitively priced, starting at $9.99, with complimentary tastings; 32 oz. growlettes will also be filled. Glass growlers start at $4.99 for a 64-oz. branded container.

“Our goal is selection and service,” said Park. “We want our customers to be comfortable trying new products while offering the greatest variety of fresh craft beer to go.”

The tap menu system, provided by local company DigitalPour, is made up of three 55” screens that will list the brewery, beer name, beer style, location, IBU, ABV and price. In addition, the display will indicate the product’s color and the level of beer remaining in each keg. The tap list will be updated in real time and will feed directly to the company’s social media and website. Additionally, the system displays avatars of customers who are checked in to Foursquare and Untappd; Growlers Hawthorne tweets are also posted for viewing.

Noting a desire to be a neighborhood fill station, Park and co-owner Jim Hillman chose to open on Hawthorne Blvd., which has been a hub of commercial activity since the streetcar era of the early 1900s. The area is a magnet for shoppers, commuters, pedestrians and cyclists.  Complementing its mix of specialty shops, theaters, taverns, brewpubs and restaurants, a dedicated growler fill station is an ideal addition to the boulevard.

“We really like the connection to the roots of the post-war Hawthorne district,” explained Hillman. “One of the major catalysts driving the neighborhood's economic recovery after the Great Depression was the growth of local bars and taverns. In many ways, we’ve come full circle.”

Growlers Hawthorne is open daily from Noon to 8pm. It’s dog friendly, with water bowls and bolts for securing leashes; bike friendly with bike racks and a bike lane running through the store; and kid friendly, with minors welcome when accompanied by an adult parent or guardian. For more information, visit www.growlers.net.
Posted by Adam Duerfeldt at 1:59 PM No comments: 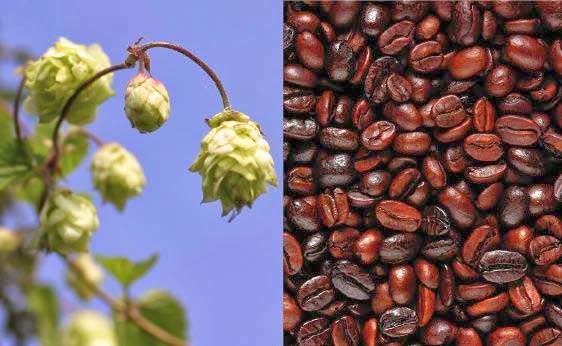 Coffee & beer: the Northwest’s two favorite brews are in the spotlight for the inaugural NW Coffee Beer Invitational, taking place Saturday, Jan. 25 from 1 to 7pm at the Goose Hollow Inn, 1927 SW Jefferson St. in Portland. Admission costs $12 which includes a festival glass and six taster tickets.

Twelve talented brewers were selected to create freshly-brewed beer made with locally-roasted coffee. With the emphasis on flavors, and an ABV of 7% or less, this event promises to surprise with both provocative and inspired combinations. Participating breweries include 10 Barrel, Base Camp, Breakside, Burnside, Coalition, Fire on the Mountain, Grain Station, Lucky Labrador, Old Town, Pints, Three Creeks and Widmer.

The cozy Goose Hollow Inn will offer its unique, convivial atmosphere along with special savories on the menu to complement the brews. And what goes best with coffee beer? Donuts, of course! The delicious Donut-O-Rama cart will be parked outside to serve up warm crème brûlée beignets.

Live music will be provided by The Austin Stewart Quartet and Whistle Trap Johnson and the Logger’s Daughter, playing throughout the day.

The event is the brainchild of Dave Fleming, the well respected and popular brewer who's worked at Lucky Labrador, Lompoc, McMenamins and Three Creeks, and is currently working with Kell's Brewpub, Coalition and Willamette Valley Hops.

Learn more about the event on Facebook.com/NWCoffeeBeer and Twitter.com/NWCoffeeBeer. For more information, contact Jean Heffernan at nwcoffeebeerinvitational@gmail.com.
Posted by Adam Duerfeldt at 1:41 PM No comments: