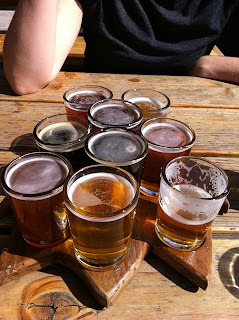 My wife and I had the day off from the kids last month and it was a beautiful day so we decided to head into Portland.  First stop was Burnside Brewing. I have been a few times but my wife hadn't so I figured it would be a fun place to stop. I ended up getting the Fresh Hop Sterling Pub draught and then Emily got a taster tray...well I pretty much got that one as well as I helped her drink it - it's a pretty big taster tray.  No food this time as it was the first stop of the day. I really like the beers at Burnside. They really make some great standards and always have some good but interesting seasonals, and the food is really good when I've had food.
Next is Emily's favorite, Cascade Brewing Barrel House. We stopped in and Emily ordered her favorite sour beer, Honey Ginger Lime. I ordered a bunch of tasters. Two that were just unreal were the 2012 Diesel Stout and the 2012 Diesel #2. Both beers were aged in whiskey barrels and the #2 version is the Chocolate version. Both just unreal, probably some of the best barrel aged stouts I've ever had.  I also had samplers of the blueberry sour, Raspberry Wheat, Pink Bellini. 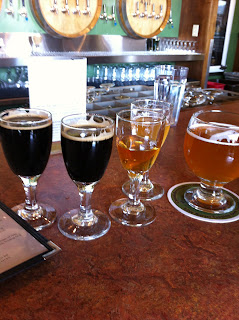 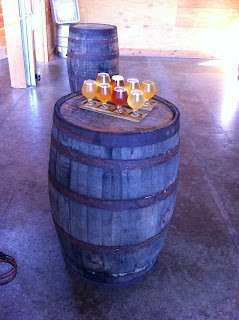 Next up and last on our stop was The Commons Brewery. This was my first trip to the Commons Brewing facility and I've really wanted to go for a long time and I wasn't disappointed.  This is a small brewing facility and is bit hard to find if you're not from the area, so use navigation if you have it.  We did a taster tray which is four beers for $4, but they had eight beers on tap so of course I had to get all eight beers....Wow that's a lot of beer and for $8 is a really good deal. We probably could have used a helper to finish the beer. Basically they have a small bar where you get the beer and then they have a couple of barrels you can put the taster trays on and then you're basically just drinking right next to the brewery and barrels.   It's just really cool. These are the breweries I really love, just production breweries where you can try the beer, walk around and see the entire brew house, fermenters, kegs/barrels and that's it. 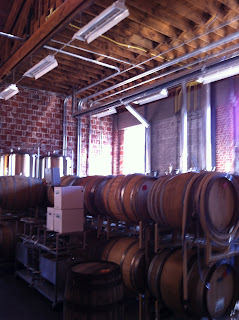 Posted by Adam Duerfeldt at 4:48 PM No comments:

Had a couple of new beers the other day.

Heater Allen's IsarWeizen, which is a bavarian style wheat beer. I picked this 22oz bottle up at the brewery in McMinnville. This is a great summer beer and one that they only make as a summer seasonal beer and its available in late July/August. Good beer, if you find it pick one up. 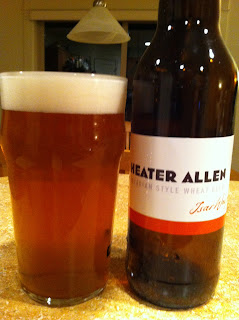 My parents picked up this 22oz bottle of  Speakeasy Ales & Lagers Vendetta IPA in California down in the Carmel/Monterey area. This is from their bootlegger limited series. This beer is almost a double/imperial IPA.  Not sure if you will find this beer in Oregon or Washington? But if you do pick it up and try it out. 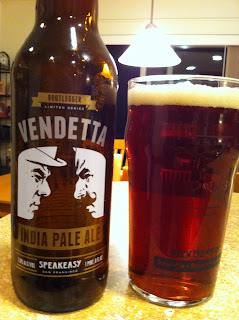 Posted by Adam Duerfeldt at 7:57 PM No comments: