Posted by Adam Duerfeldt at 9:01 PM No comments:


So a few months ago my brother and I decided to meet up in Eugene and go hit some of the breweries in the area. We also planned to make the drive out to Oakridge and visit Brewers Union Local 187 and decided to make the drive out to  Brewers Union Local 187 first. This was our second visit and just like the first time, you walk in to the English-style pub and instantly feel at home. We sat at the bar and had a full tray of their cask conditioned beers, and then had some lunch and a full pint of beer. Since this trip happened back in Nov 2012....don't think I can remember what beers we had. But they were excellent as was the food. 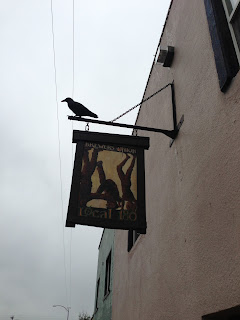 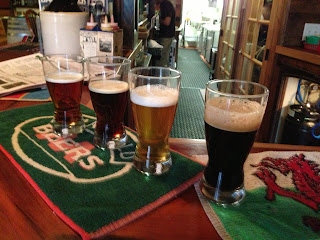 If you haven't had a chance yet to stop in at Brewers Union, you need to make the trip at least once. The pub, the beer, everything about it is really cool. 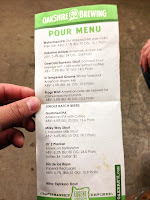 Next up we went to Oakshire Brewing, and this was also the second time for both of us stopping in.  I really like that Oakshire is a working brewery with a tasting room. It was really busy when we went in and this isn't a close-in brewery in Eugene - you really have to go out of your way to find it. But you can see how popular they are by the volume of people that were coming in to get kegs, fill growlers, and have pints. We got a full tray and it had all the standards on it as well as quite a few seasonals.
We then were off to Falling Sky Brewing. This was a second visit for me and a first visit for my brother. We picked up two taster trays plus two extra beers for a total of 14 tasters so we could try all the beers.  however you can get just one tray and you can pick the beers you want to try.
Falling Sky is a really cool small brewpub, with an eating area with long tables, a window so you can view the brew system, and an outdoor patio/eating area that you can access through roll up garage doors. The first time I went we sat outside on their patio and it was really comfortable - great for spring,summer, and fall. But being that it was November and pretty nasty we were inside this time. With so many beers on tap, you pretty much could find a beer that suits your tastes. They had a standard Bitter, NW Bitter, Maple Belgian, ESB, Fest Bier, Dry Hopped Pale, Irish Red, Spruce Pale, Pale, Wheat Lager, ISA, and a Weisse....oh and one that wasn't written down.    All the beers were good, but I really enjoyed the Irish Red and the Fest Bier. Didn't have any food but everything they were bringing out looked really good and all the other customers seemed really happy and the service was great.
Last stop of the day was Hop Valley Brewing over in Springfield. This is just off I-5 and is another place that I have been to many times as my in-laws live in Springfield. I try to hit it at least once each time we are in Springfield visiting. They also have a pretty big tray of beers to try and I guess I didn't take a picture of it...hahaha which is a first, but I will look around and see if I can find one from a previous trip.  I have eaten their food and have never had anything I didn't like. One thing that is nice is they do have a bar area at one end, so restaurant/family side and then the bar on the other. So if you're sans kids you can head straight to the bar or wait to be seated on in family side.
Eugene is really becoming a great beer destination. You really need a couple of days to explore all the breweries as there are a bunch more: McMenamins High Street Brewery, Rogue, Steelhead, and Ninkasi or The Beer Stein (beer store) or 16 Tons (Tap House & Cafe) - they even have their own Eugene Beer Week in May.  So next time you're coming down I-5 stop in at one of the many great beer places that Eugene has to offer.


Posted by Adam Duerfeldt at 8:55 PM No comments: