My brother and I went to a couple of breweries and a Bottle shop this weekend. First was Columbia River Brewing. I have been 2 or 3 times but my brother hadn't been, so we got a taster tray of all current beers and a couple of special releases. Rose City Wheat (Raspberry Ale), Sandy Blonde, ESB, CRB Pale, Hop Heaven IPA, Ground n Pound Double IPA, and Stumblers Stout. Seasonals: Bavarian Pils, Rye Ipa, Barley Wine, Belgian Trippel, Belgian Wit. Beers were all pretty good. It's a bit weird going there as I used to frequent it as Laurelwood's original brewery/pub. Nothing has changed as far as the pub and basic feel of the place, but the beer and food is different. If you haven't been you should go check it out. www.columbiariverbrewpub.com 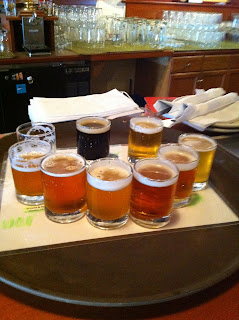 Next we went to the BeerMonger's, and it was the first time checking it out for both of us. Pretty cool place, pretty small but a very good selection of beers in refrigerator cases broken into American breweries and foreign breweries. Then it has a couple of tables, a long table and a small bar, with 8 beers on tap. We had 5 beer taster trays with Epic Brewing Hop Syndrome Lager, Commons Dark Saison, Logsdon Seizoen, Logsdon Oak-Aged Seizoen, and one more that I can't remember.  All great beers, and I really love that you can get a taster tray at a bottle shop. It really gives you a chance to try a bunch of beers and what's better than that...I also picked up a mini growler of the Epic Brewing's Hop Lager, if you get a chance to stop in at BeerMongers, do it. It's a great place with a great selection of bottles, nice small selection of taps and the owner was super nice. thebeermongers.com 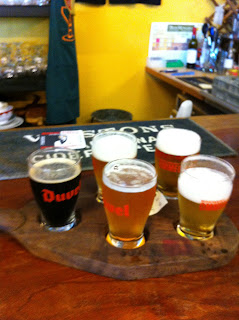 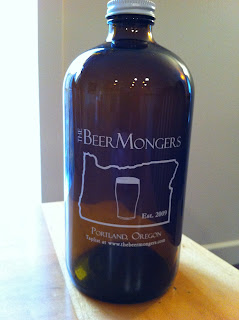 The last place we went to was the hot new brewery in PDX, Gigantic Brewing in Southeast Portland. It's a bit of a drive to find, but well worth it. The brewery/pub space is really cool, with a patio with tables, a small indoor bar with chairs, and a big garage door that can open up on the nice days. We walked in and were the first customers.  We got the four beers samples that were on tap, Gigantic IPA, The City Never Sleeps, Raychweizen & Bandit and Axes of Evil. All the beers were excellent and the popular Gigantic IPA is going to give the excellent Boneyard RPM IPA a run for its money. So if you're out in Southeast Portland stop in and get some samples, or start looking for their Gigantic IPA in 22oz bottles or on tap in PDX and Vancouver. www.giganticbrewing.com nothing on the web page but you can access their FB page and twitter from it on the bottom of the page, looks like they are using FB as the main social media page. 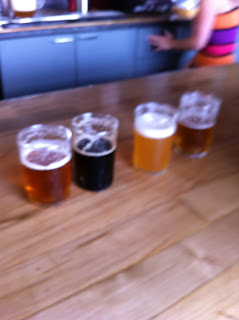 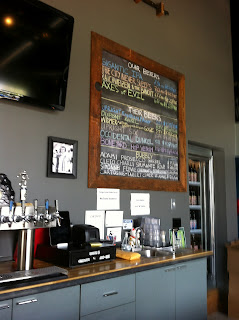 Posted by Adam Duerfeldt at 9:17 PM No comments: 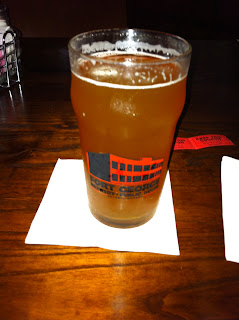 So July 6th the kids were gone and I decided to go check out the Fort George/Big Als Cousin Yeti White IPA Release Party at the Vancouver location, after a couple of drinks at Roots in Camas.  So the Belgian style -White Ipa was very good as I expected, coming from Fort George Brewing. This was a beer brewed in collaboration with Fort George & Big Al's and is on tap at the Big Al's locations.  So with this beer release you got the pint of beer ($3) and got to keep the glass which was cool, but the head brewer was supposed to be there and have samples,etc...didn't see anything really related to Ft George anywhere other than the pint of beer that I got, no signs, table with swag, etc. But of course Big Al's isn't really a destination spot for beer so I'm not surprised that nothing much was really done other than the beer & free glass. But it was a tasty beer and if you're at one of the Big Al's try it out. www.fortgeorgebrewery.com  & www.ilovebigals.com/vancouver
Posted by Adam Duerfeldt at 9:08 PM No comments: 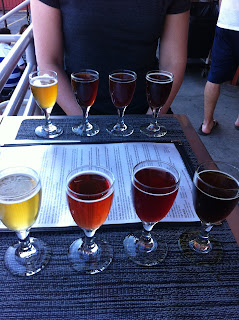 Last weekend my wife decided that she wanted to try out Pok Pok and then also go over to Cascade Barrel House. So after some dinner at Pok Pok we drove over to Cascade Barrel house. I've been a couple of times and not being a huge fan of sour beers was interested to see what my wife thought of them. Of course she likes wine so I didn't think it was going to be a big jump for her. We ended up getting the maximum tasters that one person can get which is 4 at $2 apiece. She had the Elderberry, 2011 Kriek, Sang Noir, and Honey Ginger Lime. I had the Portland Pale, Raspberry Wheat, Blueberry, and Barrel Aged Bruin. All the beers were really good. I think my taste for sours is coming around as I wasn't really turned off by any of the beers. The one beer that really stood out was the Honey Ginger Lime, just an amazing beer. All the flavors really mixed well and it was an incredibly refreshing beer on a hot day...my wife actually enjoyed all the beers and also really liked the Honey Ginger Lime and wanted to get a mini growler of it. They don't do growler sales of the sours so that was a bummer.  I really like the space that they have with the rollup doors, comfortable indoor and outdoor seating.  We didn't get any food and haven't any of the previous times so can't comment on the food. If you haven't been yet, you should check it out even if you're not a sour beer fan. Get some tasters and try it out - you might be surprised. Oh, and they do have a a couple non-sour beers on tap, so if you can't do the sours you can have one of the regular beers.  cascadebrewingbarrelhouse.com
Posted by Adam Duerfeldt at 8:52 PM No comments: