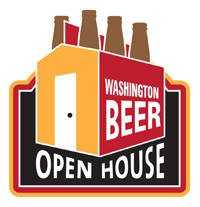 Well just like Zwickelmania last weekend in Oregon, its Washington's turn for the first ever Washington Beer Open House. This Saturday from 12pm to 5pm, participating breweries in Washington will have their doors open for tasting's, tours, and various other activities.  Over 30 breweries and brewpubs have signed up. Locally this would be a great chance to visit the local downtown Vancouver breweries, Mt Tabor Brewing and Loowit Brewing both will be participating. While your out  maybe hit a couple others that aren't on the list of participating breweries,  Salmon Creek Brewing which is close to both Mt Tabor and Loowit in Downtown Vancouver and Heathen Brewing which is further out in Vancouver.
Posted by Adam Duerfeldt at 10:04 AM No comments: 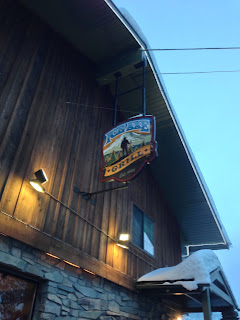 During winter break I took the family to Mt Hood for some play time in the snow. We decided to hit Skibowl for some tubing. It was a beautiful day up on the mountain with clear skies, really good snow, and great tubing. After a great day of tubing we stopped in at Mt Hood Brewing which is right in Government Camp. I've been to Mt Hood Brewing a couple of times but it's been quite a few years since my last stop, so I was looking forward to stopping in.
It was pretty busy when we walked in but we managed to get a table right away. I had the full taster tray along with a pizza 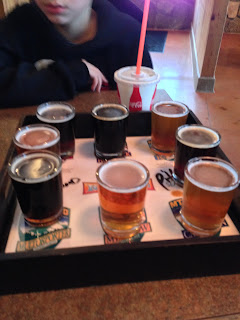 and some other food for the wife and kids.  The flagship beer that you can find in bottles (only at Zupans and Made In Oregon store) and on tap sometimes is the Ice Axe IPA. Its a great IPA and its not a crazy over-hopped beer (only 60 ibus) just a really good clean and well balanced IPA. Probably my favorite beer on the taster tray. Second would be the Hogsback Oatmeal stout. Other beers on the tray were the Multorporter Ale, Cascadian Pale, Cloud Cap Amber, Highland Blond Meadow Ale, Pittock Wee Heavy Scotch ale, and one more that I can't remember.  It was fun to stop back in at Mt Hood Brewing after such a long time; it really hasn't changed and the beer is still really good. It's a good place to take the family after some winter activities or if you're just out for a drive.

Posted by Adam Duerfeldt at 7:49 PM No comments: