SILVERTON, Ore. — Attendees at last weekend’s 12th annual Oregon Garden Brewfest celebrated both the arrival of summer and Father’s Day by enjoying 120 handcrafted beers, ciders and meads amongst the natural beauty of The Oregon Garden.

This marked the first year the festival moved from an indoor pavilion out into the forest, where breweries were set up in quaint cottages dotted throughout the woods, underneath the warm glow of bistro lights. Already regarded as the Willamette Valley’s most scenic beer festival, the move into the forest fully embraced the Oregon spirit.

“Our visitors kept saying tasting beer in the forest was the most Oregon thing they’ve ever seen," said Brittney Hatteberg, marketing director for The Oregon Garden. “Honestly, people loved it. The weather on Saturday morning was crazy, but it created this amazing community spirit – people were laughing, posting photos on social media and running from booth to booth, trying new beers. Once the storm ended, everyone enjoyed sunshine and great beer the rest of the weekend!”

More than 7,400 guests attended the event this year, where they were encouraged to explore the 80 acres of botanical gardens with drinks in hand. Crowds enjoyed the music of a dozen regional bands on Friday and Saturday evenings, including

The People’s Choice – determined by votes cast at the festival – was Worthy Brewing's Coeur de la Peche, a traditional Saison that incorporates fresh peaches from Oregon Fruit Products. Styles at the event ranged from ambers and Belgians to pales and porters, offering something for every palate.

On Sunday, families celebrated Father’s Day with root beer from Crater Lake Soda, while laying on blankets in the sun, making craft projects for dad, playing in the Children’s Garden and enjoying games, including shuffleboard, skee-ball and foosball, all set up in the Garden.

A harmonious composition of Pilsner and Caramel Malts and Czech Saaz hops fermented with non spore-forming Brettanomyces yeast, the bold ale commands presence by taking the palate on a complex journey of the senses with an initial acidic impression followed by a pleasantly smooth finish. At 10% ABV, Tart Ten brings the all the delicious and unpredictable wild funk to the table that every great party is known for. Bottled in a celebratory cork and cage 750 ml bottle its suggested retail price is $9.99 depending on location, and is also available on draft.

Naturally occurring in the wooden fermenters of old, Brettanomyces was commonly found in Belgian ales, saisons and lambics prior to sanitation processes and stainless steel vessel fermentation, which modernized brewing starting in the late 19th century. However, Brettanomyces has increasingly captured the imaginations of a growing number of brewers and aficionados due to its complex ability to showcase the true artistry and compelling depth of flavors that increasingly defines the craft beer industry.

“Our thirst for creativity is only seconded by our literal thirst for a great tasting, uniquely special beer that can boldly stand out on its own. Challenging our fans to taste something new is how we fulfill our professional ambitions,” said Victory’s Founder and Brewmaster, Bill Covaleski. “Harnessing technology and tradition, we rely on inspiration to provide the creative spark that brings such innovative creations as Tart Ten to our fans.”

Use Victory’s Beerfinder to discover a nearby location where Tart Ten is available, or download the free Victory Mobile app for Android or iPhone.

Bend, Oregon - 22 June 2016 -  To celebrate the warmer months, Worthy Brewing is releasing two fruit-focused summer seasonals with real fruit purees from Oregon Fruit Products.
Coeur de la Peche (or Heart of the Peach) is part of a new seasonal saison series that also includes their classic Farm Out Saison. The brew uses apricot and peach purees and the result is a brightly carbonated brew with a creamy mouthfeel and subtle clove and white pepper yeast flavors. Hints of peach and dried apricots round out the profile in aroma and taste. Coeur de la Peche is available in 22-ounce bottles and on draft through September.
Kama Citrus IPA is a well-balanced blend of Centennial and Equinox hops, with the addition of real Mandarin orange and grapefruit purees. It’s clean and crisp with a juicy citrus flavor and fresh tangerine on the nose. A pronounced hoppiness and balanced profile combined with a 6.2% ABV might just make this the perfect summer IPA. Kama Citrus IPA is available in six-pack 12-ounce bottles and on draft through October.


Worthy Brewing Company opened its doors in early 2013, delivering remarkably balanced, filtered ales that are hand-crafted using premium ingredients and the pristine water from the Cascade Mountains in Bend, Oregon. Worthy’s campus includes a large outdoor biergarten, full restaurant, and a greenhouse and hop yard onsite for growing estate and experimental hops in conjunction with Oregon State University and Indie Hops. An expansion with expanded restaurant seating, a banquet space, and an observatory is planned for completion in Late Summer 2016.  For more information, please contact CEO, Chris Hodge, at chris@worthybrewing.com
Posted by Adam Duerfeldt at 8:47 PM No comments: 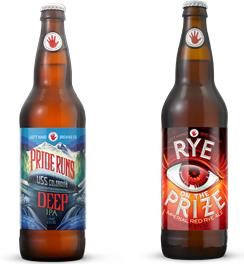 LONGMONT, CO • June 21, 2016 – Left Hand Brewing Co. is adding two new 22oz limited release beers to their Big Mo series – Pride Runs Deep and Rye on the Prize. Pride Runs Deep IPA with Colorado blue spruce pine tips is brewed in support of the USS Colorado Commissioning Committee. Running silent in the deep for months at a time, the attack sub and 134 officers and crew members are armed and ready to protect our oceans and territories from threats against our freedom. Pride Runs Deep will be released at Falling Rock Tap House on June 29th at 4pm, in the company of supporters and veterans. Proceeds will help support the Committee, funding commissioning events and supporting the crew. More information on the Committee can be found at http://usscoloradocommittee.org/.

Ft. Collins, Colo. – June 20, 2016 – New Belgium Brewing and Ben & Jerry’s are teaming up once again to create a new ice cream inspired beer while raising awareness about climate change. Inspired by one of Ben & Jerry’s smash hits, New Belgium has developed Chocolate Chip Cookie Dough Ale, a special release beer to hit the shelves in the fall of 2016. Fifty-thousand dollars in proceeds will benefit Protect Our Winters (POW) a non-profit dedicated to raising awareness around climate change. As Fellow B Corporations beholden to stakeholders, including their communities and the environment, the two like-minded businesses have long championed similar causes.

“We are excited to be partnering once again with the good folks at Ben & Jerry’s and POW,” said New Belgium Director of Sustainability, Jenn Vervier. “The beer in development tastes amazing and we look forward to talking about climate change and climate action. With the upcoming election and a new administration, year two is even more important than the first round.”

The Colorado-based craft brewer and famed ice cream maker are both registered Beneficial or “B Corporations”. B Corps are held to performance standards that are comprehensive and transparent, measuring a company’s impact on workers, suppliers, communities and the environment.

“Working with New Belgium Brewing and Protect our Winters to be able to impact climate was a highlight of 2015, and so, we’re doing it again,” said Jay Curley, Senior Global Marketing Manager of Ben & Jerry’s. “This new beer is delicious and unique and the issue of climate change is still increasingly urgent.”

An announcement later this year will detail the focus of the campaign and the specifics around the partnership.

ABOUT BEN & JERRY’S
As a social justice company, Ben & Jerry’s believes in a greater calling than simply making a profit. Ben & Jerry’s incorporates Linked Prosperity into its business practices in a number of ways including a focus on values-led sourcing. The company produces a wide variety of super-premium ice cream, non-dairy frozen dessert, yogurt and sorbet using high-quality, responsibly sourced ingredients. Ben & Jerry’s, a Vermont corporation and wholly-owned subsidiary of Unilever, operates its business on a three-part Mission Statement emphasizing product quality, economic reward and a commitment to the community and became a certified B Corp (Benefit Corporation) in 2012. Ben & Jerry’s products are distributed in over 35 countries in retail, franchised Ben & Jerry’s Scoop Shops, restaurants and other venues. The Ben & Jerry’s Foundation’s employee-led grant programs totaled $2.4MM in 2015 to support efforts to improve social and environmental justice throughout the United States. For the inside scoop on Ben & Jerry’s visit www.benjerry.com.
Posted by Adam Duerfeldt at 9:07 PM No comments:


Spokane, WA… The Washington Brewers Festival awarded No-Li Brewhouse Large Brewery of the Year amongst 950 beers judged in a state with over 400 breweries.


“No-Li Brewhouse is a people driven organization that creates platforms to build upon in experimentation, growth and a steadfast belief in the future,” says Brandon Nelson, No-Li Brewer. “Together, we have a relentless pursuit of improving and stretching ourselves to build something special, something different and something grounded in people and craft beer!”

Cheers!
About No-Li Brewhouse
Born & Raised in Washington’s Inland Empire, No-Li Brewhouse is locally-owned and community-minded crafting Spokane-Style beers with No Boundaries: innovative beers brewed with locally-sourced ingredients. In addition to being named the NBWA 2015 National Brewer Partner of the Year, No-Li has won eighteen international awards, including a gold medal from the 2012 Great American Beer Festival and 2016 Large Brewery of the Year at the Washington Brewers Festival.

For more information about the beers, brewery and the pub, visit www.nolibrewhouse.com, or follow them on Facebook/Twitter/Instagram @nolibrewhouse.
Posted by Adam Duerfeldt at 9:02 PM No comments: