This Friday and Saturday and Sunday (April 26,27, 28) is the ninth annual Oregon Garden Brewfest. 62 breweries will be presenting their products, for a total of 125 beers, ciders and mead. Here is the list of participating breweries.  See info below. 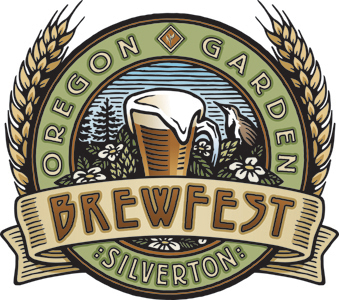 WHAT
The 9th annual Oregon Garden Brewfest. The Willamette Valley's biggest beer festival will feature 125 beers, ciders & mead from 62 different breweries over three days. Located in the historic town of Silverton, just an hour’s drive from the Portland metropolitan area, the Oregon Garden Brewfest also showcases live music from 22 area bands, food, tasting lessons by Women Enjoying Beer and a homebrew competition presented by Capitol Brewers. The event takes place among the beautiful grounds of The Oregon Garden, all decked out for spring.

Tickets at the door are $15 for one-day entry and increase to $20 after 5pm, and include five tasting tickets. Three-day entry at the door is $30 and includes 10 tasting tickets and no express entry, and VIP entry is $50 and includes 35 tickets and no express entry. Designated drivers pay a cover charge of $5 and receive a bottled water. Once inside, a full glass of beer costs four tickets, and a taster costs one ticket. Additional tasting tickets may be purchased for $1 apiece. The event is cash only, with an ATM on-site. Parking at The Oregon Garden is $5 per car; free shuttles will be available to various locations in town. The Oregon Garden Brewfest is for ages 21 and over on Friday and Saturday; minors are welcome all hours on Sunday.

OTHER
Silverton is an hour away from Portland; avoid drinking and driving and make a night of it. The Oregon Garden Resort is offering a package for $189, available April 25 through April 28, that includes accommodations, breakfast for two, two one-day tickets to the Brewfest and two food booth vouchers. Reservations are available at http://oregongardenresort.com/Packages.htm or call 503-874-2500.

Posted by Adam Duerfeldt at 8:04 PM No comments: 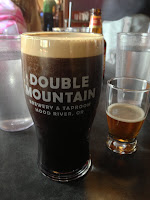 Spring break is always a crazy time around our house. The last couple of years we've had gymnastics events either at the front end of spring break or at the tail end, so we usually stay close to home. Last year we went to Great Wolf Lodge and this year we decided to go a bit further from home and  head to Sunriver for some quick rest and relaxation.  Once we were on our way we made a quick stop in Hood River at Double Mountain Brewing for some pizza and beer. It's always a good idea to stop at Double Mountain, and this really got our weekend trip off on the right note.  From there we made our way over to Sunriver, which is about a 3.5 hr drive from Camas. We found the cabin that we would be staying in and settled in for a couple days of laziness.  Of course first on the agenda of being lazy was to call our friends who live in Bend and meet up. Our good friends are lucky to live in one of the best cities in the world for beer.  On our way over to their house, I was on a mission to fill up some growlers for dinner.  First we headed to Boneyard but realized we wouldn't make it before they closed at 5pm. So after thinking about which other brewery to go for fill-ups we decided on Goodlife Brewing. This was my second time visiting Goodlife (review here). It was just a quick stop for fills, but since it was packed with merry beer drinkers, I wish I could have stayed and enjoyed  a pint with them all. Instead I filled up with Descender IPA and Mountain Rescue Pale Ale and took them to our friends' house for a nice dinner of pizza, salad, and beer.....what could be better? 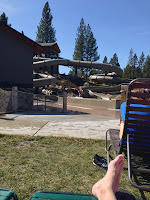 Our next day in Sunriver was really about the kids and getting them over to the SHARC complex. I must say it's really cool and was sorely needed after the long drive the previous day. We lucked out by actually having really great weather, so good in fact that they opened up the outdoor lazy river and slides.  Of course I had a few beer related stops that I really wanted to  make while we were in Bend/Sunriver.....Worthy Brewing and The Mountain Jug Beer Shop. 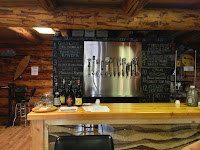 While the kids were relaxing after a day of swimming, my friend Corey and I headed over to The Mountain Jug Beer Shop which is owned by Mark and Tonya Cornett. I was surprised how close it was to the Sunriver resort area, just down the road a minute or so. I was glad to find another beer-centric establishment so close by. (Sunriver Brewing is also at the resort, right in the main retail area, and it's a nice operation worth a visit.) Mountain Jug gives you the opportunity to get a great selection of Central Oregon breweries - pints, tasters, or growlers fills and a nice selection of bottles from many different breweries.  First thing you notice is the Sunriver cabin look from the outside (pic from the outside was accidentally deleted) and the feel when you walk in. Lots of wood, an actual sit down arcade game with a bunch of cool games that you probably played as a kid. They have coolers with all sorts of different bottled beers and then of course 12 taps of just Central Oregon breweries. You can have glasses, pints, or growler fills of all the beers unless they are specialty beers. ie, barley wines, sours,etc. - no growler fills on those.
I actually decided to have a taster tray of Saisons that they were sampling (Upright, Crux, Bruery, and Boulevard). Saisons arn't a beer that I normally choose so it was fun to try something different. One thing that is really cool is that they have an actual record player with LPs that you can actually play....you don't see that anywhere and its a cool touch. Its really a very relaxing place with good music and places to sit and drink your beer. 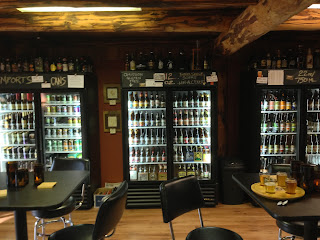 The owners, Mark and Tonya, are very nice and talked with us about beer for quite a while. One thing that was cool is that Tonya is the new research and development brewer for 10 Barrel and one of her sours was on tap - Raspberry Crush. It was an excellent beer and became my wife's new favorite.  Later the same afternoon, we woke my wife up from a nap, dragged her down there to try the sour, and it was so good she had two and forgave me for interrupting her nap. The Mountain Jug Beer Shop is a must hit if you're staying in Bend/Sunriver. 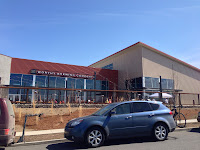 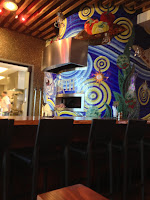 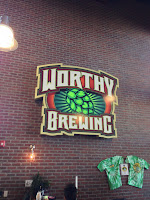 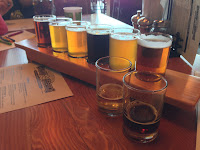 On our way home from Sunriver we stopped for lunch at the new Worthy Brewing.  This is a huge operation. The pub itself isn't huge but has plenty of seating with a large bar, booths, free standing tables and then an outside patio. We were seated quickly around the back by the side of the bar and near the cool mosaic-tiled pizza oven. I ordered the tray of beers and added 2 extra seasonal beers. All the beers were really good as expected, given the brewer is Chad Kennedy of
Laurelwood fame. The Lights Out Stout, Go Time Extra Pale, and Easy Day Kolsch were the beers that stood out for me. 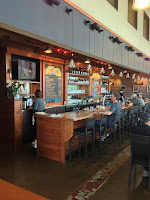 The food was pretty good.  The kids both ordered off the kids' menu (the pasta my son got at first was crunchy so we sent it back in exchange for an awesome grilled cheese.)  My wife had the black bean chili and I had a flatbread club sandwich.  I didn't get any good pictures of the brewhouse but you can tell they are serious about brewing at Worthy
Brewing. They have the 30 barrel brewhouse with
capacity to brew 60,000 barrels with plenty of room to grow. Hopefully the next time I go I can
get a tour of the impressive brewing operations. They also have an OSU-affiliated hop yard and you can see the greenhouse and what will become the hop yard. That should be really cool to see once they get it up and running. All in all a very impressive brewery/pub and worth a visit when in Bend. 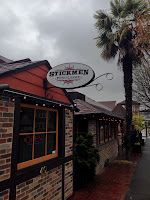 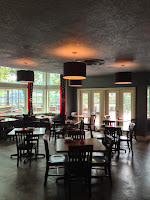 coupon to Stickman Brewery and Skewery in Lake Oswego. Now I had hoped that just my wife and I could go but with the coupon expirng soon I decided lunch would be the next best option since my wife happened to have the day off. So my wife, daughter and I jumped in the car and off we went to Lake Oswego.
I rarely make it into Lake Oswego but first off parking is really hard to find in downtown Lake O. You basically have to drive around searching for free parking in the lots over in a park area or find on street parking in the surrounding neighborhoods - not easy. After a few minutes trying to find a space in the free parking lot we were able to find a space in the neighborhood just down the street from Stickman. From the outside it's a pretty funky older building and once you get inside it still seems old but updated nicely with multiple areas to sit and eat. Since it was lunch on a Friday I figured there would be some other folks eating, but I was surprised that we were the only people there other than staff.  We were seated right next to the window that looks out towards the patio and the lake. I ordered the taster tray and they had quite a few beers on tap, eight in total, and nice big tasters.
For a smaller brewery that basically 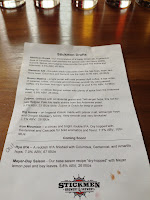 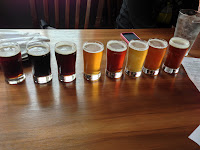 just started putting out beers I was impressed - they were all really good. The Meyer-Bay Saison which was a base Saison dry hopped with Meyer lemon peels and bay leaves was very good and would be an amazing beer on a hot day sitting outside on their patio. The Westside 420 IPA (Cascadian dark ale) was also really good and the other standout was the Buona Mattina, a coffee Porter. But all the beers were good. The food that we ordered using the specific coupon (2 apps, 2 salads, 2 entrees) was pulled pork nachos, fried zuccchini, Caesar and Stickman salads, BLT sandwhich & cheeseburger, and chicken nuggets for my daughter. No pictures of the food, unfortunately. If you want to try the skewers, don't go at lunchtime like we did since skewers aren't on the lunch menu. I was bummed about that since I really wanted to try the skewers. The food was good, with huge portions.  If I hadn't had a coupon I probably would've just ordered an entree because it was a ton of food for two.  It actually didn't all fit on the table at once, it was so much food. I thought the service/waiter was good but it took forever for the food to show up and like I said I think we might have been the only folks in the place so that was a bit weird. But in general I think they have a pretty cool pub with lots of old and new character all mixed into one with good beer and interesting food. Plus the patio has to be one of the best spots around, to be enjoyed on a warm day sitting outside next to the lake, with a beer.

Posted by Adam Duerfeldt at 8:47 PM No comments: