Long overdue post from a Labor Day weekend trip to Bend,OR.  First off I want to thank our good friends Corey and Heather for letting us crash at their house for the weekend. We had a great time with you. Second I'm not going to blog about each brewery as I've been to most of the breweries in Bend so really this will be about the new breweries that I hadn't had a chance to visit yet.
So once we decided to go to Bend for the weekend I knew that I wanted to complete the Bend Ale Trail and go to the Old Woody Brewfest and hang out with our friends Corey and Heather. So after we dropped the kids off at the in-laws' we headed out and drove through the Mackenzie pass and eventually turned off into Sisters and hit our first brewery of the day, Three Creeks Brewing . They are the 10th brewery location on the Bend Ale Trail and if you go out of your way to get your pass stamped from them then you get a secret prize along with your Silipint. Three Creeks is a cool place and its a nice stopping point on the way to Bend. The old west/saloon atmosphere is really cool and the beer is really good, stop in if you get the chance. We had lunch,  a taster tray, and scanned our Bend Ale trail app for our stamp and then hit the road towards Bend. So when we finally made it to Bend we didn't waste any time and hit the road in search of breweries.  The first brewery that we hit even though it wasn't part of the Bend Ale Trail was Crux Fermentation Project  run by former Deschutes brewing brewmaster Larry Sidor and a couple of partners. You can tell as soon as you walk in that this is a serious brewery setup. It really is a unique and beautiful setup with big windows behind the bar showcasing the serving tanks and off to far side the copper kettles, fermentation tanks and a glassed in area containing open fermentation vessels.  We ordered the taster tray and it came with 6 of the 8 beers, and our friends ordered 2 pints of beer, so we were able to try all the beers. All of the beers were good and I especially liked the Sugar Daddy and Sugar Mama beers which on the beer info card were called sweet pale ales. Definitely a must-hit in Bend. We then hit Cascade Lakes Brewing , well actually the Cascade Lakes Lodge (no brewery at this location) for a taster tray. They have quite a few establishments around the Bend Area and Redmond, and are one of the original Bend breweries having started back in 1994. This was one of the first breweries I visited in Bend with my friend Corey back in 1995 or 1996, it was really cool, just a small brewery in a warehouse with a taster area. They are much bigger now and the beer is still really good but I miss that basic their old basic brewery/taster area.

After that it was off  to GoodLife Brewing for a taster tray. This is one of the new breweries in Bend and it's a huge space. It has a 30 barrel brewery with tons of room to grow, a Bier Hall with room for many to sit and drink beer and order food, then they also have an outdoor Biergarten. Its a really cool place and I will definitely go back. The beer is really good, of course when I find their beers in bottles or on tap around Portland I usually make sure to either buy a bottle or get a pint. I really like the Mountain Rescue Dry Hop Pale and Descender IPA.
Next up we we continued on to another very new brewery Oldmill Brew Werks and this one was a hard one to find as it's basically in a normal office building - you wouldn't even notice there is a pub/brewery in the building.  Cool little space but unfortunately for us they were basically out of all their beer as they were upgrading to a bigger system (10 Barrel Brewing's old system), they had one beer of theirs on tap which was the Blond Ale and then a bunch of really good guest taps. Their food menu had some great options and we had the Scotch egg which was really good.  Next time we go back I hope to be able to try all the beers. After that we just went around to a bunch of the breweries to continue to get our stamps for the Bend Ale Trail: Deschutes, Bend Brewing, McMenamins. From Mcmenamins we just kept walking until we hit the Little Woody Barrel Aged Beer and Whiskey Fest. This was my first time attending this fest and I can tell you that this was one of the best beer fests I've been to. It's small so even though it got crowded later in the evening I never felt like it was too crowded, also you get an actual glass, not one of those plastic cups, so that was nice. Of course all the beers were barrel aged so that was really great as I love barrel aged beers. Breweries that attended were 10 Barrel, Block 15, Boneyard, Bend Brewing, Brew Werks, Cascade Lake, Deschutes, Hopworks, GoodLife, McMenamins, Ninkasi, Silver Moon, Three Creeks, Oakshire and one cider company Carlton Cyderworks. Beers that stood out for me were, Boneyard's Suge Knight, Deschutes Pinot Twilight and Plum Line Sour (wife loved this one), Goodlife's Jam & Oak aged pale Ale, and Oakshire Bourbon Nutcracker. I plan to make this one every year  its a great fest with great barrel aged beers and it's for a charity...oh but these were all big beers so if you go be careful they add up really quick...hahaha.
After the Fest we hit 10 Barrel Brewing for some late night food and a couple of beers. Didn't take any pics of 10 Barrel as I been numerous times and well its a great place with great food and beer just like Bend Brewing, Deschutes both of which I've also been to numerous times but figured these were the ones that I would skip over this time.

The next day we decided to get over to Sunriver and the new Sunriver Brewing Company for an early lunch. We must have been the first people in as it was a bit early but that was nice as we got a chance to take in the space and order a taster tray. They had 3 of 4 beers on tap, stout, pale, amber, with the  IPA being out (we subbed a guest beer for that one). The beers from what I've heard are actually being brewed by Phatt Matt's brewing in Redmond. The beers were good, not excellent but good, they did have some other good guest taps as well . The food was good, the space is really cool and really its just what Sunriver needs, now you can just walk or ride your bike down from your house/condo to the brewery and get a pint. After a nice lunch at Sunriver Brewing we drove back to Bend and stopped in at Silver Moon Brewing which we had been to once before. Had a quick taster tray and then drove over to Boneyard Brewing which was my first time
visiting the brewery/tap room.

What's cool about Boneyard is that its just a production brewery and tasting room and nothing else. It's kinda of nice after hitting all these brewery/pubs to go to a brewery who just wants to brew awesome beer and nothing else. We had a chance to have 3 tasters ($1 each) of RPM (Which I drink any time I find it on tap), Girl Beer (which the wife really liked), and Diablo Rojo (got a couple of growlers to go.) We were bummed they didn't have more on tap, since recently I checked and they had like 6 beers on tap in the tasting room, but during the summer months they were getting slammed and basically all their beer were gone....not a bad thing if you're a brewery....haha but bad for the tasters. But they had just installed a bunch of new tanks and started around the clock shifts, so that's awesome... Boneyard beer is excellent and I have seen in various beer sites/blogs that they are planning on moving into a new 15,000 sf facility in 2013 with a bigger brewhouse (50 bbl brewhouse) and canning...so we should be seeing even more Boneyard beer in the future. 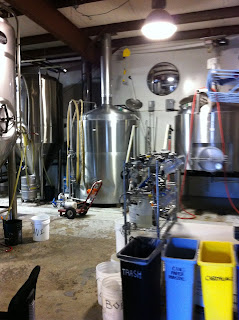 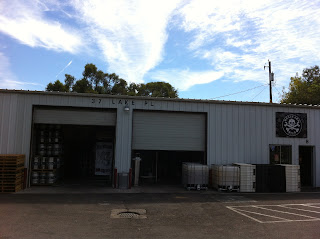 So had a great Labor day weekend, weather was perfect, the beer adventures were fun. A big thanks to our friends Corey and Heather for hosting and for the laughs!