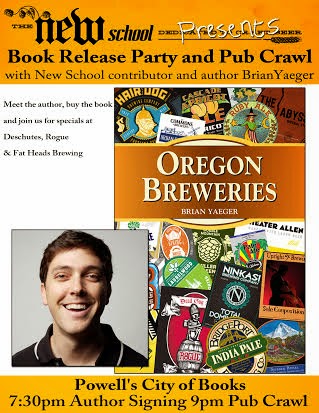 Portland resident Brian Yaeger is excited to celebrate the release of his new book "Oregon Breweries", sign copies, and answer questions at the famed Powell's City of Books on 10th & West Burnside at 7: 30 p.m. on Friday December 5th. Brian will be joined by Bend, Oregon-based author and beer blogger Jon Abernathy from The Brew Site who is also launching his new book, "Bend Beer."

Oregon Breweries features a forward by Gayle Goschie, one of the state's third-generation hop farmers. It is a comprehensive guide to the breweries of the Beaver State, a leader in the craft brew revolution, featuring 190 breweries and brewpubs. Each brewery profile includes individual backgrounders on brewers and owners, styles and brands of brewed, regional visitor information, and the author's "Pick" of the best beer to try. It also includes information on forthcoming breweries, local beer events, top bars and retailers, and more.

Post meet-and-greet and signing, Brian Yaeger will lead a short pub crawl beginning at Deschutes Brewery's PDX pub at 9 p.m. for a tasting with the brewers including special beer tappings and complimentary drinks. From Deschutes we'll head to the newly opened Fat Head's Brewing on 13th & NW Davis and then head a few blocks north to the Rogue Flanders Brewpub. Depending on the hour and how many people are still up for drinking we may or may not finish with a nightcap at Brian's favorite hidden gem of a brewery - Tugboat Brewing.

Attendance is free, a love of Oregon Breweries and beer is not.


Brian Yaeger is the author of Oregon Breweries and Red, White, and Brew: An American Beer Odyssey. He contributed to the Oxford Companion to Beer and is frequently published by All About Beer, Draft Magazine, CraftBeer.com, CRAFT and of course The New School. Yaeger has appeared on NPR's Marketplace with Kai Ryssdal, Martha Stewart Living Radio, and The Brewing Network. He earned a Master in Professional Writing (with a thesis on beer) from the University of Southern California. He runs Inn Beervana Bed & Beer in Portland along with his wife Half Pint, son IPYae, and dog Dunkel. Follow him on Twitter at @Yaeger and @OregonBreweries and, begrudgingly, on Instagram at @OregonBreweries. Lastly, don't forget his personal beer chronicles at BrianYaeger.com.
Posted by Adam Duerfeldt at 10:25 AM