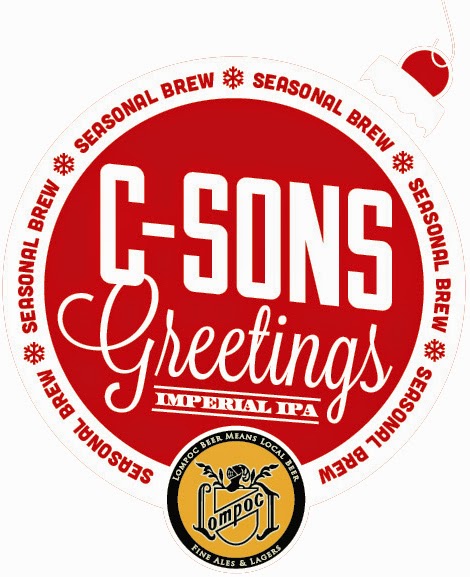 
eight holiday beers including Portland’s original Hanukkah seasonal
Press Release:
PORTLAND, Ore. – Just as Santa has eight reindeer, so does Lompoc have eight different holiday beers, including one brewed for Hanukkah. The annual Lompoc Holiday Beer Extravaganza will celebrate the release of them all on Tuesday, Dec. 2 from 4pm to Midnight at the newly renovated Sidebar, Lompoc’s barrel tasting room at 3901 N Williams Ave.

The holiday celebration will take place in the recently renovated Sidebar, which has added a roll up glass door to allow in more light, booth seating, expanded taps and an all-new menu of small plates designed for sharing. There will be complimentary appetizers featured at the event.

All beers will also be available at the other Lompoc pubs on Dec. 2 as well, including Lompoc Tavern on NW 23rd Ave, Oaks Bottom Public House on SE Bybee Blvd, Hedge House on SE Division St, and Fifth Quadrant on N Failing and Williams. C-sons Greetings and Bourbon Barrel Aged Old Tavern Rat are also available in 22 ounce bottles, at a cost of $5 and $12, respectively.

BLITZEN: This bright, straw-colored holiday favorite is dry-hopped with Centennial hops, dried apricots and coriander. The hops lend a slight spicy and earthy aroma, while the apricots provide a faint sweetness with a fruity flavor and aroma. 4.6% ABV

BREWDOLPH: This Belgian style red ale features a malty and creamy body. Brewed with the Belgian Ardennes yeast strain, it boasts a mild fruitiness and a spicy clove character. 7.7% ABV
C-SONS GREETINGS: Brewed and dry-hopped with all seven “C” hops, this beer features a deep copper color with a piney, citrusy, floral and resinous aroma. A rich, caramel malt finish and an endless developing hop presence complement its full hop flavor. 8.0% ABV
JOLLY BOCK: This lager was brewed with a generous amount of Munich malt to develop the deep amber color and rich malt flavor. The malty flavor is balanced with a spicy hop bitterness. 7.3% ABV

OLD TAVERN RAT: This dark amber-colored barleywine was aged for almost a year prior to its release. It has a strong bitterness that is balanced by the sweetness of caramel and toffee flavors. 9.4% ABV