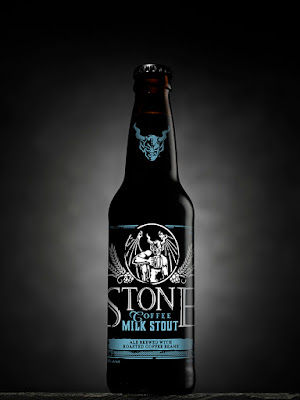 Mild ale malt was used as a base grain to help create a rich, roasty character, and other specialty grains contribute cocoa, licorice and subdued coffee flavors. Magnum hops bring a clean bitterness, gently contrasting with the beer’s malt-forward qualities. Brewed with whole coffee beans from San Diego-based roaster Ryan Bros Coffee, the bitterness of the coffee is balanced out brilliantly by the addition of milk sugar, which provides sweetness and creaminess to the stout’s smooth, easy-drinking texture. Those inviting flavors are supported by a bumped-up malt bill, giving this year’s version more body and a bit more oomph in the ABV department (from 4.2 to 5 percent).

“The recipe for this beer was originally brewed on the 10-barrel pilot system at Stone Brewing World Bistro & Gardens - Liberty Station as an experimental, one-time offering,” said Stone Brewmaster Mitch Steele. “Since we were really pleased with the original brew of Stone Coffee Milk Stout and how well received it was among our fans, we decided to make it available nationwide as an annual release, making only minor adjustments to this year’s recipe. Fans should still expect to enjoy the same roasty malt character but now with a richer mouthfeel and slightly fuller body. ”

Stone Coffee Milk Stout is a smooth combination of sweet and bitter coffee flavors that work well with a diverse selection of foods. For the purpose of maximizing enjoyment or exhibiting appreciation for the beer, fans are encouraged to share photos of their favorite Stone Coffee Milk Stout food pairings on Twitter, Facebook, Instagram, Google+, Pinterest using #PairedWith.

This beer will only be available during fall and winter, the ideal seasons for savoring rich, coffee-accented ales. Enjoy Stone Coffee Milk Stout fresh or store it at proper cellaring temperatures (55°F or lower) for up to one year after its “bottled on” date, which can be found on the shoulder of the bottle.


About Stone Brewing Co.
Founded by Greg Koch and Steve Wagner in 1996, San Diego-based Stone Brewing Co. is the 9th largest craft brewer in the United States. Stone has been listed on the Inc. 500 | 5000 Fastest Growing Private Companies list 11 times, and has been called the “All-time Top Brewery on Planet Earth” by BeerAdvocate magazine twice. The multifaceted company will be the first American craft brewer to own and operate its own brewery in Europe, and is also building a production brewery and destination restaurant in Richmond, Virginia. Brewing at both locations is anticipated to begin in early 2016. Known for its bold, flavorful and largely hop-centric beers, Stone has earned a reputation for brewing outstanding, unique beers while maintaining an unwavering commitment to sustainability, business ethics, philanthropy and the art of brewing. For more information on Stone Brewing Co., please visit stonebrewing.com or the company’s social media sites: Facebook, Google+, Instagram, Pinterest, Twitter and The Stone Blog.
Posted by Adam Duerfeldt at 8:04 PM