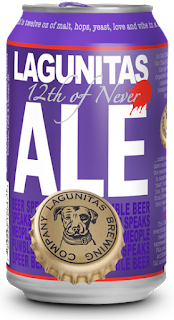 The magical, mystical 12th of Never is a blend of Old and New School hops that play bright citrus, rich coconut, and papaya-esque flavors, all on a solid stage of English puffed wheat. Tropically hoppy. Light, yet full-bodied. Bright and citrusy. The 12th of Never Ale is everything we’ve learned about making hop-forward beer expressed in a moderate voice.  Pale, cold, slightly alcoholic and bitter.  It’s all we know.

These 12oz mini-kegs (AKA cans) are an exciting new option for us, and we are stoopid stoked at the opportunity for y'all to take us to all those new, nelophobic locations…

Video of the caning of 12th of Never:

Details on the new Stupid Wit

This UNFILTERED Belgian-ish Wit-ly-esque-ish-ness brew features a dry twang of hoppy bitterness and is perfect for the summertime drinking!

Posted by Adam Duerfeldt at 9:41 PM