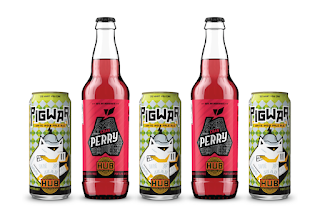 CranPerry Cider
HUB’s CranPerry is a new year-round pear cider featuring fruit sourced entirely from the Pacific Northwest. CranPerry is a stunning pink-orange hue from the addition of cranberry. The cranberry, sourced in part from fellow B Corporation Starvation Alley Farms, provides a thirst-quenching tart complexity that complements the semi-dry pear foundation. CranPerry clocks in at 5.5% abv.


CranPerry, HUB’s second cider package, follows the release of HUB Hard Cider in cans and bottles in May of 2015. HUB received their winery license in August of 2014. Since then, HUB brewers have made an effort to quench their thirst for both beer and cider with array of experimental ciders at both pub locations.


The name Pig War commemorates the standoff in 1859 between American and British authorities over San Juan Island, where the beer’s wheat is grown. The only casualty of this 15 year standoff was one wayward pig.

About Hopworks Urban Brewery
Hopworks Urban Brewery strives to revolutionize and inspire the brewing industry with practices that drive quality, protect the environment and improve the community we live in. Utilizing organic malts and a combination of locally-sourced, organic and Salmon Safe hops, the company’s 20-barrel brewery produces 13,500 barrels of beer and cider a year for HUB’s two brewpubs and for distribution throughout the Northwest. Hopworks is a family-owned and operated business, the first Certified B Corporation brewery in the Pacific Northwest, a gold-level bike friendly business, and is recognized as one of the Best Green Companies To Work For In Oregon. In 2016 Hopworks introduced Gear Up IPA and CranPerry Cider as new year round offerings.

Posted by Adam Duerfeldt at 8:40 PM