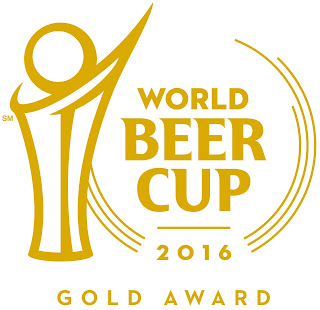 Portland, Oregon • May 12, 2016—Ecliptic Brewing claimed a gold award at the 2016 World Beer Cup, a global beer competition that evaluates beers from around the world and recognizes the most outstanding brewers and their beers.


Ecliptic Brewing received its gold award in the Brown Porter beer style category for its Capella Porter.  The award was accepted by John Harris, Owner and Brewmaster of Ecliptic Brewing and an icon in the history of Oregon beer. Harris was one of 19 Oregon brewers to bring home an award and one of the two gold award recipients in Portland.


“I am very excited for all of us here at Ecliptic to get our first international award,” said Harris.  “Having brewed another award winning Porter in the past makes this award even more special for me.” Harris added, “After 30 years of brewing beer, being recognized by our peers for our quality is awesome.”


Gold, silver and bronze awards in the competition’s 96 beer-style categories were presented May 6, 2016 during the World Beer Cup award ceremony at the Pennsylvania Convention Center in Philadelphia, Pennsylvania.


World Beer Cup winners were selected by an international panel of 253 beer judges from 31 countries. Regarded as the “Olympics of Beer Competition,” the World Beer Cup saw an impressive field of 6,596 entries from 1,907 breweries in 55 countries.


Presented by the Brewers Association, the World Beer Cup has been held every other year since 1996, to celebrate the art and science of brewing by recognizing outstanding achievement. For more additional information, visit the World Beer Cup website.


Capella Porter is named after a bright star in the constellation Auriga.  Sweet, dark malt aromas are followed by a nice medium body.  Flavors of chocolate and caramel meld with just a touch of roast. A collection of American hops (Nugget, Chinook, Centennial, and Cascade) brighten this lively porter.


Ecliptic Brewing is a venture from John Harris, an Oregon beer icon whose background is steeped in the state’s rich craft brewing history. The name Ecliptic unites Harris’ two passions: brewing and astronomy, and as such, the brewery celebrates the Earth’s yearly journey around the sun through both its beer and restaurant menus. Executive chef Michael Molitor rotates his seasonally inspired menu every six weeks in accordance with the old world calendar. Harris’ signature beers include Spica Pilsner, Orbiter IPA, Phobos Single Hop Red Ale, and Capella Porter. For more information, visit: www.eclipticbrewing.com.
Posted by Adam Duerfeldt at 9:48 PM