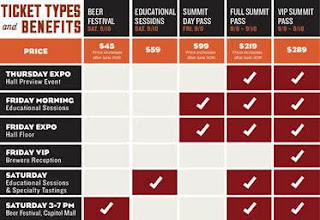 “The Summit brings together top brewing talent in the state, scores of homebrewers, beer enthusiasts and industry professionals to taste and learn in a lively, experiential setting,” said Tom McCormick, CCBA’s executive director. “We’ve built on the success of last year and scheduled two days for industry networking and education, with everything from a job center to a distributor workshop, and one day focused on craft beer lovers and homebrewers, featuring coffee, food, judging and homebrewing techniques. We truly have something for everyone at the Summit.”

The 2016 California Craft Beer Summit and Beer Festival will include:
·         Interactive experiences, including hands-on brewing techniques, ingredient-based displays and regional tastings
·         Tailored educational sessions for beer lovers, homebrewers and industry members, from how to start a career in craft beer, to how to build a beer list, to the history of the West Coast IPA
·         Food and beer pairings and chef demos
·         “Tap Talks” with famed brewers and leaders in the craft beer industry
·         A premier tasting experience for California craft beer at the Summit Beer Festival on the steps of the state Capitol

“This isn’t just a conference and it isn’t just a festival,” said McCormick. “The Summit connects every thread of the craft beer community and celebrates the passion and creativity that defines the industry. We are proud to highlight the success story of craft beer in California and the individual brewers, passionate craft beer lovers and innovative technologies that support it.”

The three-day event will culminate on Capitol Mall at the Summit Beer Festival, the largest California craft beer festival, featuring more than 150 small, large and specialty breweries from across California.

“We’re excited to come together as a community and participate in this premier event for craft beer in California,” said Patrick Rue, owner of The Bruery and member of the CCBA Board of Directors. “Last year the Summit brought thousands of loyal fans, homebrewers and our California brewing family together to celebrate the art, technique and taste of beer. This year we are raising the bar. It’s exciting to see California strengthen its reputation as the place to go for craft beer across the nation.”

Posted by Adam Duerfeldt at 8:07 PM