Hop growers are always developing new and experimental varietals, and Stone Brewmaster Mitch Steele incorporated some of the brewing team’s favorites while revamping this venerable recipe. Additionally, Steele and company implemented contemporary techniques such as “hop-bursting,” where large late hop additions focus on extracting hop aromas and flavors rather than creating additional bitterness. Hop bursting has proven successful with a number of Stone Brewing's IPA varieties, so it was a no-brainer that this method would be employed along with others (we can’t share everything) for Stone Ruination Double IPA 2.0.

“In this case, the exit of one beer and the entrance of a new one is simply a rebirth,” explains Stone CEO and co-founder Greg Koch. “Developing this recipe was a great challenge for Mitch and the brewing team, but it gave us the opportunity to look at some of the knowledge we’ve acquired from the past 13 years and incorporate it into a beer that originally helped spur a hop revolution. Of course, we made sure to maintain the two most important traits of Stone Ruination IPA. It’s massively hoppy and massively bitter!”

Thanks to a recipe calling for purely pale malt grain, the beer showcases a vibrant hops bill comprising six different varietals. As with the original Stone Ruination IPA, Centennial hops remain the star in both the brewing and dry-hop stages. Magnum and Nugget hops provide a hefty dose of standout bitterness. Citra, Simcoe and Azacca hops, all relative newbies (not to mention some of the most highly sought-after hops on the market), were added to the new recipe to provide the bountiful tropical fruit and resinous pine aromas. Combined, the rich tapestry of hops results in a taste profile rife with citrus, melon and tropical fruit flavors.

To fully enjoy the copious amounts of hops coaxed, squeezed and packed into this double IPA, it should be consumed by the “enjoy by” date printed on the bottle neck. Stone Ruination Double IPA 2.0 is proof that such a masterful “Liquid Poem to the Glory of the Hop” should not be limited to only a single stanza. 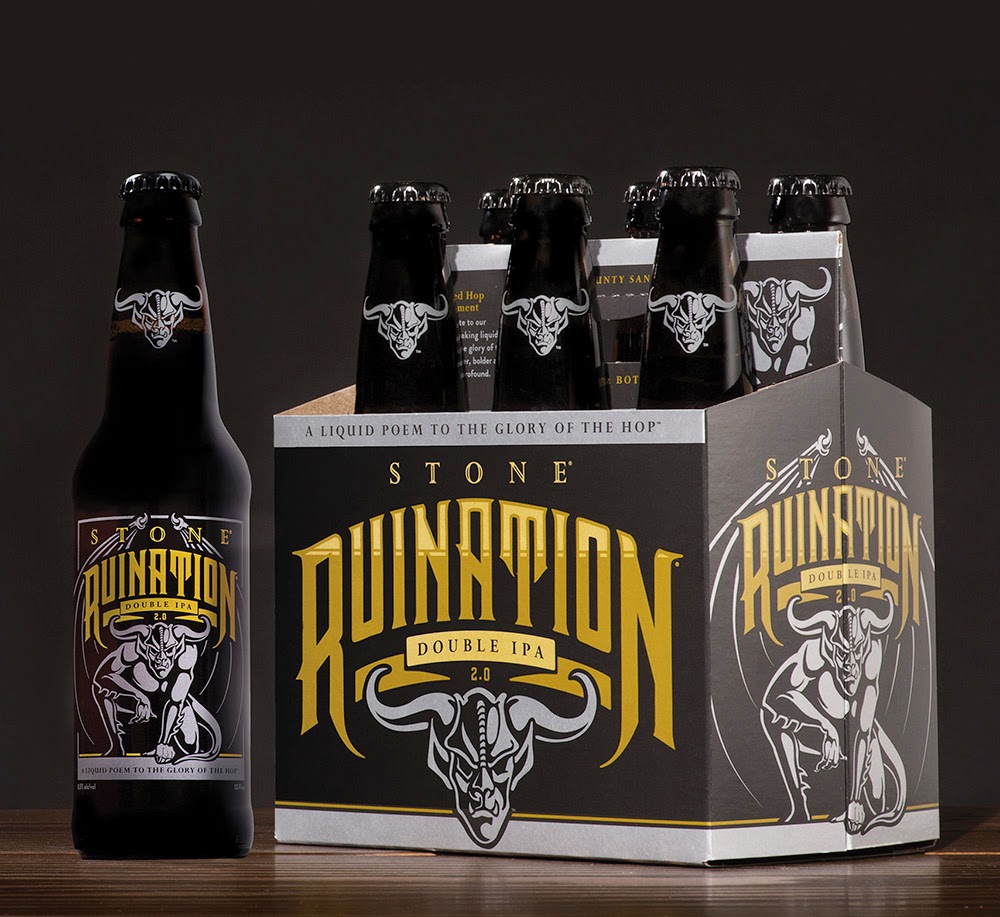 About Stone Brewing Co.
Founded by Greg Koch and Steve Wagner in 1996, San Diego-based Stone Brewing Co. is the 9th largest craft brewer in the United States. Stone has been listed on the Inc. 500 | 5000 Fastest Growing Private Companies list 10 times, and has been called the “All-time Top Brewery on Planet Earth” by BeerAdvocate magazine twice. The multi-faceted company will be the first American craft brewer to own and operate its own brewery in Europe, and is also building a production brewery and destination restaurant in Richmond, Virginia. Brewing at both locations is anticipated to begin late 2015. Known for its bold, flavorful and largely hop-centric beers, Stone has earned a reputation for brewing outstanding, unique beers while maintaining an unwavering commitment to sustainability, business ethics, philanthropy and the art of brewing. For more information on Stone Brewing Co., please visit stonebrewing.com or the company’s social media sites: Facebook, Google+, Instagram, Pinterest, Twitter and The Stone Blog.
Posted by Adam Duerfeldt at 8:31 PM