Emily and I have now lived in Camas, Washington for seven years. Seven years ago, I was shocked by how behind Clark County was with craft beer, especially considering how close the area is to Portland...aka Beervana. These days, things have changed quite a bit. We now have a bunch of breweries and tap houses to choose from and most restaurants are serving at least a couple good beers. Last week another newcomer to the southwest Washington beer scene opened.

Grapes 'n Growlers is located in Vancouver at the Riverstone Marketplace a couple doors down from QFC. Emily and I went over to check it out last Friday and stayed for a couple hours and met two of the four owners,Tom Mahoney and Ashley Cahoon. In between talking with the owners and enjoying a freshpint or two (and wine) with friends this is what we found out about Grapes 'n Growlers.

Walking in there's a nice little seating area and a couple of tables. 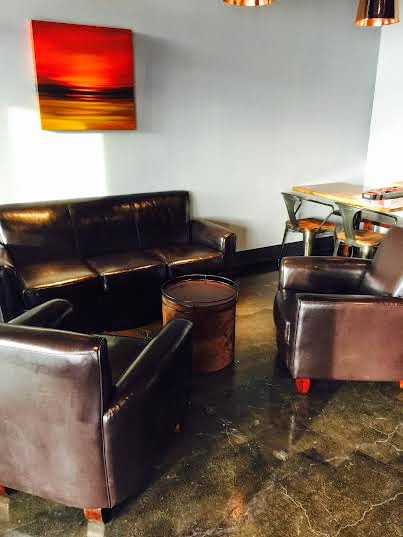 You will also notice the very long bar top with seating for many....including kids...yeah I will get to that in a minute..

Behind the bar is a mini bar shelf for times when it's really busy. Also down toward the back you will find more tables.
Along the wall you will see that Grape 'n Growlers has an impressive amount of taps and two different kegerators. Currently Grapes 'n Growlers has 51 taps pushing beer, cider, kombucha, wine, and for the non-drinker, root beer. They are using Portland-based company DigitalPour software for their taplist.  DigitalPour taplist is cool in that it's realtime. You can see how much is left in each keg of beer, it gives prices on pints & growlers, displays style & ABV info, and it even pushes information out to different social media sites so it keeps you updated on what taps have been changed.

Another cool thing about Grapes 'n Growlers is they're doing wine on tap....yep kegged wine. When we were there they had at least seven wine varieties on tap, both reds and whites. Emily decided that she wasn't really in the mood for beer, so she enjoyed wine from the tap...how cool is that?


In the future if laws change in Washington you might be able to grab a growler and get it filled with wine at Grape 'n Growlers to take home, just like you can in Oregon. Currently the law in Washington only allows Washington winery tasting rooms to fill wine growlers.  But you can get growlers to go of beer and cider and kombucha. 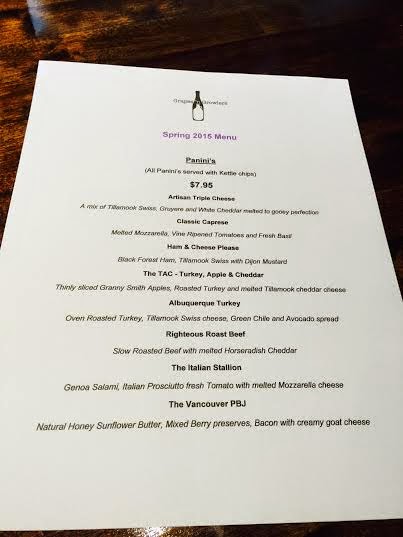 This is where the family vibe comes in. We asked Tom if  kids were allowed and it was a resounding "yes". Tom said that it was in the plans all along as they built out their business. With so many young families in the area they really wanted to allow parents to bring in their kids. And yes kids are even allowed to sit at the bar with you...well I think Tom called it a food service grade bar or something similar, but they can sit with you at the bar enjoying a root beer float while you have a freshpint or a glass of wine.

We really liked Grapes 'n Growlers. It has a lot to offer, especially with the wine on tap option and kids being allowed. Its sure to be a hit whether you grab a growler to go or sit down for a freshpint, glass of wine, or maybe a root beer float and a panini.

Posted by Adam Duerfeldt at 5:22 PM