Last weekend Emily, our daughter, and I were on the road again to Coeur d' Alene, Idaho for another gymnastics meet. Over the years we've always stopped in Spokane at No-Li Brewing.  This year we did just the same and had a couple beers & samples and some food. Since we first started making this annual trip, I've wanted to stop in at Iron Goat Brewing. But due to various reasons I've never had the chance to stop, until this year.

Iron Goat Brewing is located in what seems to be a mix of residential and industrial space. I would say it's about a 5 minute drive from No-Li Brewing (good to know if you're brew hopping in Spokane) and maybe 10 minutes from downtown Spokane. I used GPS and the address listed on Iron Goat's website and had no issues finding the place.  That said, I kind of felt like I must be going the wrong way because the area didn't look like one where a brewery might be situated...given the mix of residential and industrial buildings... but then I came upon this cool brick building with the Iron Goat Sign out front. 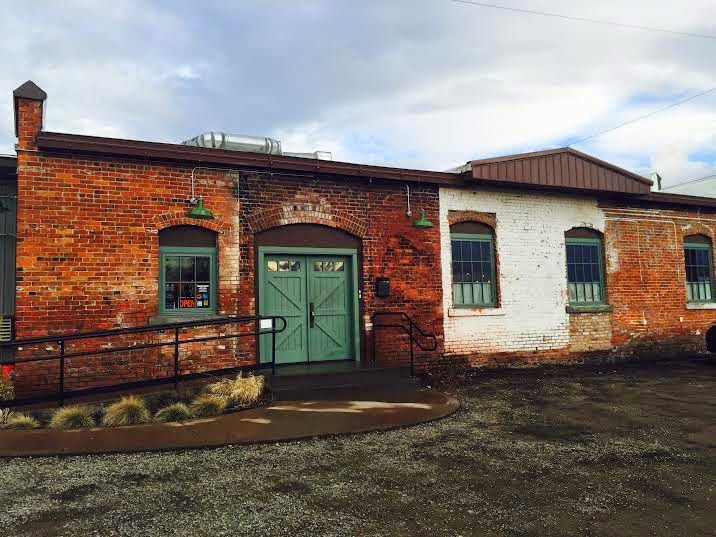 Since we had our daughter with us, I went inside to ask about kids being allowed in the taproom. Good news! It's a family-friendly establishment, and the space is divided up to make it comfortable for everyone.  On one side there's a little bar area and seating for adults only and on the other there's a bigger area with seating and tables for all ages. That was a pleasant surprise since lately it seems to be hit or miss for us on which breweries/taprooms allow kids.


They had a nice selection of beers on when we visited. 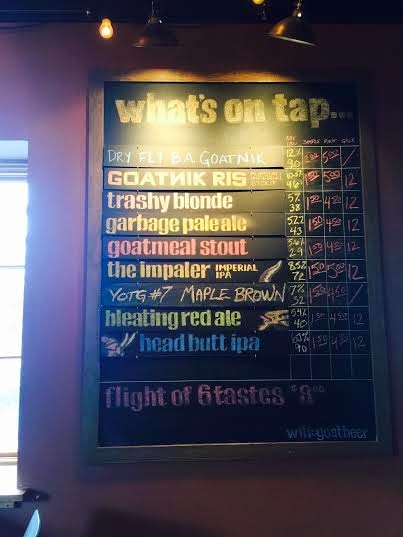 I ordered two trays (one of everything available) from Paul Edminster, one of the owners. Paul's also one of the brewers and just so happened to be manning the bar that afternoon. 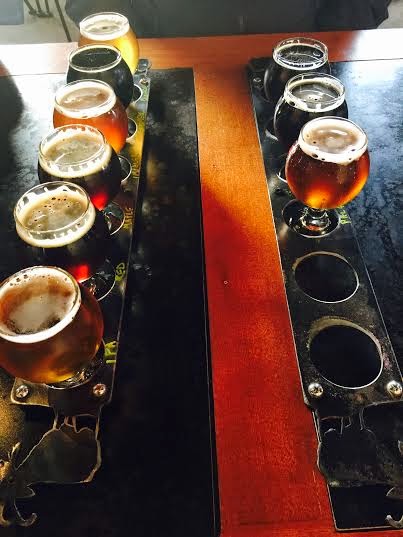 Digging into the beers I was impressed. They were all really good and I can't think of one beer that didn't really like. Standouts for me were the DryFly Barrel Aged Goatnik and the regular version of Goatnik (especially since you could try them together), The Garbage Pale Ale, and the Head Butt IPA. Emily enjoyed all the beers as well but the YOTG #7 a Maple Brown ale really stood out for her.
While enjoying the samples, Paul came over and asked if I wanted to see the brewhouse and of course I couldn't say no to that. Big thanks to Paul as he was a one man show while we were visiting.

Iron Goat's Brewhouse is not visible from the taproom. Down a little hallway from the taproom, the brewhouse and fermenters all packed in cozily in one room. The 10 Hectoliter brewhouse (8.5bbls) has some history as it was used by Bozeman Brewing and prior to them by Spanish Peaks Brewing.


In addition to the brewhouse, Paul showed me another room that housed some barrels aging beer. He also noted that they would be bottling some of their beers for the first time a couple days later. As of just a week ago you can get 22oz bottles of Headbutt IPA and Impaler Imperial IPA in the Spokane area. In the future you should see Trashy Blond and Goatmeal Stout. Hopefully we might see those bottled beers make it out of the Spokane market and into wider distribution in Washington.

I'm really happy we decided to finally stop in at Iron Goat Brewing.  Putting it all together - the rustic and artistic vibe of the taproom, Paul's hospitality, being allowed to bring the kid in to enjoy the atmosphere of craft brewing, and of course great beer - Iron Goat Brewing is what I love in a brewery.  Make sure if you're visiting the Spokane area, or even just driving through, to make a stop at Iron Goat.

Posted by Adam Duerfeldt at 7:56 PM