You may or may not have known that the Kells organization, with pubs in Seattle, Portland, and San Francisco, opened a brew pub on NW 21st in Portland last year. My wife and I attended a media event/tour of the pub and brewery on Monday to hear from the the McAleese family about the pub, the beer, and the food.
The first thing you will notice about the Kells Brew Pub when walking in is that this is not the downtown Kells that you probably have been to. This is a more refined pub, it's quieter, has a much warmer feel to it with lots of wood, private booths with sliding doors, stained glass windows, and a big wooden bar. 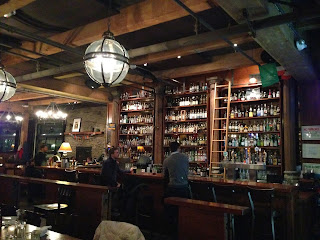 Currently, Lead Brewer Garrett McAleese (Son of Gerard & Lucille McAleese) and Head Brewer Dave Fleming who has brewed for Lucky Lab brewing, Three Creeks brewing, and Lompoc Brewing, are brewing on a 10 barrel brewhouse and supplying three beers (Irish Lager, Irish Red, and Irish Pale Ale) for both Portland locations and Seattle. After just the first year they are already expanding by adding two 20 BBL fermentors to keep up with demand. With the added fermentors Dave Fleming says they plan to start adding seasonal beers, with the first being an Imperial Brown ale being made for the Holiday Ale Festival and, yes, maybe even an Irish Stout in the future.

This was actually my third time visiting the brew pub. My wife and I visited for the first time right after it opened last year, and honestly at the time I wasn't too impressed. I didn't write up anything then because I figured they were new, and I hoped I would visit again with better luck after they got the kinks worked out. My second visit was a couple of weeks ago, and that visit was much better than the first. I stopped in with my brother prior to a brewfest. We sampled their three beers, which were all pretty good.  I had a pint of the Lager.  I think my brother got the Irish Pale Ale. We also got some wings which we enjoyed.  The bartenders were very friendly and one was very talkative.  I didn't realize it at the time, but the talkative one was Garrett, who is one of the brewers and a McAleese.  The third visit was for this media event, and again I brought my wife along.  We sat across the table from the McAleeses, so got the opportunity chat with them.  Really nice people, very friendly.  Gerard mentioned he prefers the Irish Red of the three beers they're brewing.  We also got to meet and talk with Dave Fleming, the head brewer. You can really feel the sense of pride that they all take in offering up a warm and inviting family-friendly brew pub that offers the highest quality food and beer.

Our best selling beer is a traditional, drier Irish style red ale, hopped with Northwest hops that trace their roots back to their European cousins. Subtle fruitiness and pleasant esters develop from the Irish Ale yeast. This is a true, all-night session ale.
4.5% ABV, 25 IBUs

Hopped with healthy amount of some our a favorite NW hops including Chinooks, Summit, Galena, Zeus just to name a few, then dry hopped to set off the aromatics of our freshest hops. The beer is a blend of NW finest IPAs and a traditional English/ Irish Pale Ale.
6.2% ABV, 71 IBUs

People often think of dark creamy stouts when they think of Ireland, but the Lager is more commonplace in the younger generations. Crisp bubbles hit your tongue as you inhale the slight aromas of Czech and German variety hops. The crisp flavors are made by the lovely cold fermenting European larger yeast. This beer is enjoyed year-round.
4.5% ABV, 14 IBUs

Posted by Adam Duerfeldt at 3:18 PM