Southern Oregon Bewing Na Zdravi Czech Style Pilsner 4.8% - Medford, OR
Can't remember where I picked this one up, most likely at Fred Meyer. Pours a nice clear gold color, thin head. Aromas of malt, grain, mild hop. Taste is light and mild, overall a nice beer. If you're in Medford you should swing by and check out the brewery. I went a few months ago and it has a nice tap room with a great taster tray of beers, also has a tour, which I didn't go on......interesting fact when I was in college at Southern Oregon state in Ashland, my roommates and I wanted to open a brewery called SOB brewing.....or Southern Oregon Brewing....should have copyrighted the name....hahah. www.sobrewing.com   - (this is The Wife: Not a super fun tap room to visit.  Have to say it was lacking in atmosphere, but at least they served up free pretzels and there was a chatty guy sitting to my right that helped perk things up a bit. Otherwise, meh.) 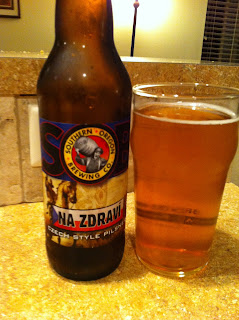 Sierra Nevada Torpedo Extra IPA 7.2% - Chico, CA
Picked this 16oz can from New Seasons; they can be found in bottles or 4 packs of cans. Nice gold amber color with nice big head. Smelled very hoppy and grassy. Taste is bitter dominant, hops, citrus,pine.  Good beer if you're in the mood for a pretty big hoppy/bitter American style IPA.   http://www.sierranevada.com/beers/torpedo.html 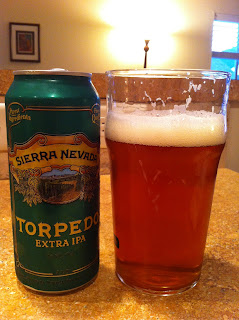 Hilliard's Saison/Farmhouse Ale 6.0 % - Seattle,WA
I've been waiting along time to try this beer, and had planned to hit the brewery the last time I was up in the Fremont Area of Seattle but couldn't make it during the short hours they were open, so I was very excited to see the cans at Trader Joe's. They have the Saison and Amber both in 4 packs of 16oz cans. Pours a hazy yellow, nice frothy head. Aroma of yeast, spice, pepper. Taste of lemon/citrus, pepper, yeast, spice. This is a great beer. I've never been a big drinker of Saisons but I really like it and the retro design on the can is really cool.  Next time I will pick up the Amber and hopefully soon I will visit the brewery. Pick it up if you see it and try it out.  hilliardsbeer.com 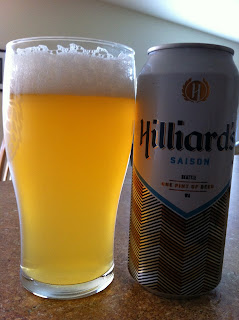 Posted by Adam Duerfeldt at 9:15 PM