Ok after a brief hiatus, a couple of beer tastings:

1 - New Belgium Pale lager: This is a canned beer that is packaged in 4 packs. I picked up a 4 pack at Fred Meyer and its a really great beer.  Nice gold appearance, with nice frothy head. Nice clean lager smell with a hint of hops and bread. Taste is a bit sweet with a bit of hop flavor, very clean and crisp.Overall a solid drinker...I would be happy drinking a 4 pack any day of the week.
www.newbelgium.com/beer/detail.aspx?id=fc35795d-8d9d-4f04-9e35-c1c55c2a0018 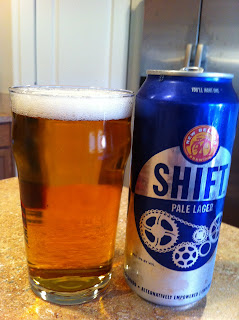 2 - Redhook Long Hammer IPA: Another canned beer that can be found at the supermarket. I picked mine up (a six pack) at Fred Meyer, but it can also be bought in bottles. Redhook has been around forever and was one of the original microbreweries back in the day. And it was one of the first micros that I was introduced to way back in 1993 (I think) in college....Redhook ESB...we drank a bunch of it and were lucky to have visited the original brewery in the Fremont area of Seattle back during a spring break while in college...it's gone now (now a chocolate factory) and  Redhook is one of the big craft breweries (breweries now in Woodinville,WA and Portsmouth,NH) and part of the Craft Brewers Alliance, which is Widmer/Redhook/Kona breweries. The Redhook Long Hammer IPA is one of those great IPAs - has been brewed since 1984. Basically just the right amount of hops, not over hopped like you're seeing a lot of lately. Very nice appearance of copper, almost gold, decent head. Not much aroma, but it smelled fresh, a bit of hop, lemon. Taste was a bit of pine, sort of earthy, malt, seemed pretty balanced with the hop & malt, very mellow. Now days I think this is more of a hopped pale ale. I really like it, as I'm not really into the over hopped IPA craze. If you like mellow IPAs then you will like this one.
redhook.com/beers/ipa/ 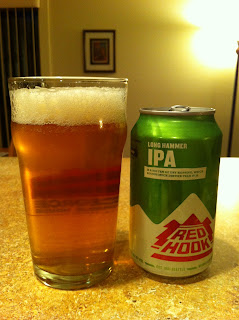 3 - Sin City Brewing, Las Vegas, Nevada: So Emily and I took a quick vacation to Las Vegas in July and had a great time, and if anyone cares we stayed at the MGM Signature which is a non gambling, non smoking hotel that is part of the MGM resort - they are behind the main hotel back behind the MGM pool complex...we had a great time, the hotel was excellent with each tower having its own pools..we used the adult pool (so great seeing the little kids being turned away...haha) sat around at the pool swimming and drinking...yes you heard it here BUDLIGHT.....hey it's so fricking hot that micros really aren't the best option and oh yeah they don't have any micros available...so it was Budlight and lots of mojitos.....anyway on to Sin City Brewing. I didn't even try very hard to get out and see the breweries of Vegas as you really have to make a serious effort to drive to get to them and I've been to a couple of them and just didn't want to do that this time. Also there are many new beer bars/ beer focused restaurants on the strip now and I really didn't make any effort to go to them...but I did decide to hit Sin City brewing in the Planet Hollywood in the Magic Mile shops. This is the original bar spot for Sin City. I've had their beer each time I've hit Las Vegas but never stopped in at the bar.....so my first impression is that this is the typical Vegas walk by bar, grab a beer and go, there really isn't much to it. It had like 7 bar stools at the bar and a couple small two-seater pub style tables, but really it's just a grab and go type of place. In fact the emphasis seemed more on buying the Sin City beer glasses and shirts as I watched a few people just walk right up and buy stuff but not try the beer. So I asked for a taster tray or tasters and the guy was like no problem, breaks out the plastic cups and gives me about a 3 to 4 ounce taster of each of the four beers on tap....had to almost laugh, hell of a presentation with the plastic cups....haha. They don't even have info on the beers, just a taster in a plastic cup....so a bit disappointing  but hey it's Vegas. I guess they assume that most people don't care about that sort of thing.  The four beers are Weisse, Amber, Blond, Irish Dry Stout. I must say that I actually liked all the beers Like I said earlier I've had their beers before and always am surprised by how good they are and for Vegas I think they are really good. Hopefully next time I can hit the Flamingo location as its supposed to be the largest and therefore maybe I can get a actual taster tray and really sit down and give the beers more time...also I hope to hit some of the new beer bars as well, Public House/Venetian, Holstein's/Cosmopolitan, and Hofbrauhaus just to name a few.
www.sincitybeer.com 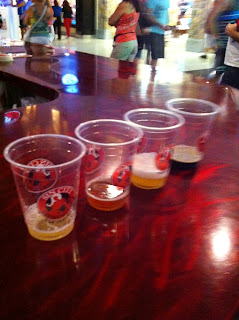 Posted by Adam Duerfeldt at 9:19 PM