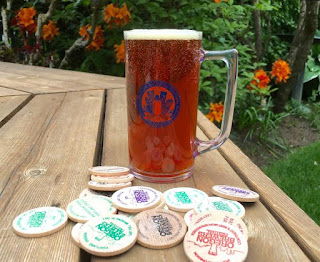 Oregon Brewers Festival has once again changed up its drinking vessel for the brew festival. See details below.

For the first 25 years of the OBF, beers were served in a thick, milky white plastic mug. In 2013, we switched over to a glass to better allow the color of the beer to shine through. That continued in 2014, but last year the Portland Police and Portland Parks decided to ban glass from all parks, so we switched to a high-quality, BPA-free plastic glass. This year, we are returning to a mug, but now it's a 12 oz. clear styrene plastic free of BPA and phthalates.

More on the upcoming 2016 Oregon Brewers Festival.
Posted by Adam Duerfeldt at 9:54 PM