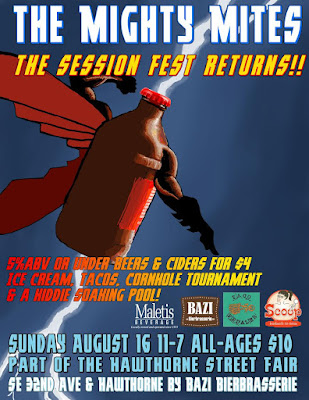 Portland, OR – The 4th Annual The Mighty Mites Session Fest returns outside Bazi Bierbrasserie (1522 SE 32nd Ave) on Sunday, August 16 from 11 AM – 7 PM as the premier beer event of the Hawthorne Street Fair.

In a world full of Double IPA’s and Imperial Stouts a hero will rise to stand up for the small, lighter, sessionable beers of equal flavor and tastiness. Featuring beers that fall under the “Session” style category as defined by being 5% ABV or below, The Mighty Mites presents a selection as varied as they are flavorful from session IPA’s to tart refreshing Berliner-Weisse’s, Ciders, and even sessionable, quaffable, poundable cans. The taplist has includes a variety of new and classic beers and ciders:


Beer and cider tasting is $10 for a cup and four tickets each good for a large 7 oz beer or cider tasters and two tickets for a full cup. Additional tickets are $2 each. Individual cans of Firestone Walker Easy Jack and Breakside Post Time Kolsch are only $4 each!

Outside in the beer garden, this family friendly event features Scoop Ice Cream and food from the Taco Pedaler. To keep the party going DJ Phil will be spinning World Music. There will also be outdoor games like Cornhole and a kiddie soaking pool to dip your toes into!

At the bar, Bazi has created a special (non-sessionable) beer cocktail for the occasion dubbed the Shandy Mighty for $5, it contains gin, honey coriander syrup, egg white, and Hefe Shandy served on the rocks. There will also be a full menu available inside Bazi with Happy Hour specials on food and drinks all day!

If Monks lived in Portland, this would be their watering hole. Bazi brings centuries of Belgian inspired beer and food under one roof plus a premium liquor selection. Explore with a nationally recognized Bier-Cocktail or simply sip on a glass of wine. As a Euro-centric establishment we embrace bringing community together through sports. We are an official Thorns, Timbers and American Outlaws partner and showcase these and other events on our 114" HDTV with surround sound. Named “Top 100 Beer Bars in America” by DRAFT Magazine 2014, 1015 and “Top 10 Best Beer Bars in Portland” by The Oregonian. Located in the heart of the Hawthorne District, tucked away just off of SE 32nd Avenue.

Posted by Adam Duerfeldt at 8:41 PM