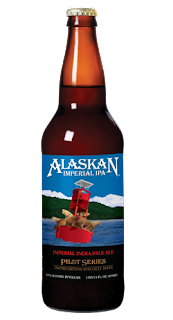 Big and bold, with tons of flavor and a concentration on Simcoe and Mosaic hops

JUNEAU, Alaska (July 1, 2015) – Alaskan Brewing is releasing its latest Pilot Series beer today, simply called Imperial IPA, that is dedicated to exploring and accentuating the unique and exciting hops of Yakima Valley growers.  One hop grower and developer in particular is a common thread among two of the hops used in this new beer.

“Our Imperial IPA is a celebration of hops, and especially two hop varieties – Simcoe and Mosiac. Both hops have the same developer in common, a remarkable Washington State hops grower named Jason Perrault,” said Alaskan Quality Assurance Manager David Wilson, who is chiefly responsible for the hops buying at Alaskan Brewing.

Perrault is a fourth-generation hops grower in Yakima Valley, and is part of a vibrant hops-development region that has in large part been a catalyst to the growth of the West-Coast IPA style.

“He worked with other hops developers, including Chuck Zimmerman and Gene Probasco, to accentuate the high aromatics and complex flavors that we are trying to showcase in this Imperial IPA,” said Wilson. “He also helped develop the Citra variety of hop that we use in many of our beers. But in this beer we are concentrating on the intense pine and tropical fruit taste and aromas of the Simcoe and Mosaic hops.”

Imperial IPA is made with Juneau’s glacier-fed water and an array of hops used in the boil and dry hopping, including Simcoe, Mosaic, Topaz, Bravo, Summit, Nugget and Apollo hops. Pale, Munich, and Light Crystal malts provide the backbone.

The label depicts a group of Stellar’s Sea Lions hauled out on a buoy in Southeast Alaska waters. Named after Georg Wilhelm Steller, the pioneering German botanist who sailed Alaskan waters with Vitus Bering in 1741, these massive creatures are classified as “near-threatened,” but have maintained a stronghold here in Alaska. Noisy and pretty darn stinky, the buoys where they rest are a spectacle for any passing boats, and at over 1,200 pounds these sea lions can be an intimidating presence in the water for nervous kayakers.

Alaskan’s Pilot Series beers come out 3 to 4 times a year on draft and in 22-ounce bombers, and are typically available for about 3 months. They are usually bigger beers, and this Imperial IPA comes in at 8.5% ABV and 80 IBUs. Imperial IPA will be available in all 17 states that distribute Alaskan Beer.

Posted by Adam Duerfeldt at 7:03 PM