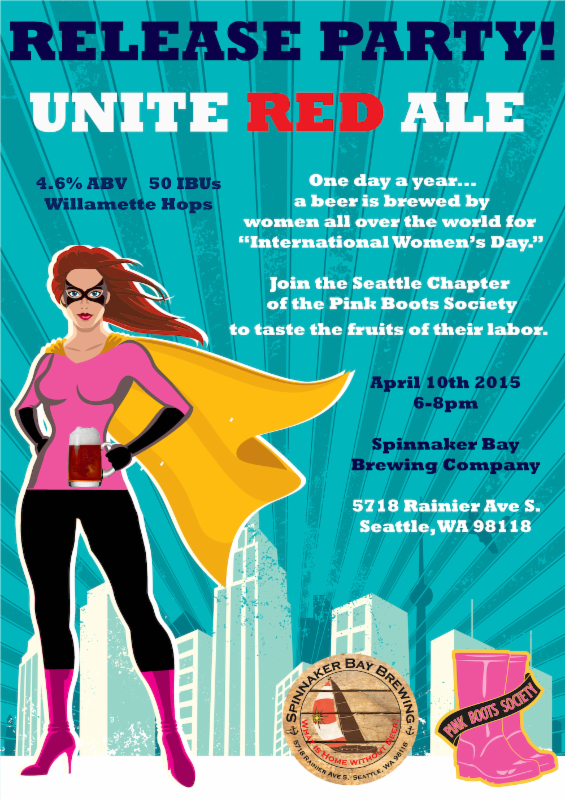 unique versions of 'Unite Red Ale' were brewed by the women at six Washington breweries, as well as by female brewers all around the world.

The Seattle breweries that hosted this event were Hale's Ales Brewery, Pike Brewing, Elysian Brewing, and Fremont Brewing. The other Washington breweries were Dick's Brewing in Centralia and Birdsview Brewing in Birdsview.  Women from many other local companies also gathered at these locations to assist in brewing the Unite Red Ale on March 8th.
Unite Red Ale Release Party will be held from 6-8pm Fri, April 10th
The release party for the different versions of 'Unite Red Ale' will be held from 6-8pm on Friday, April 10th at Spinnaker Bay Brewing Co.  The Seattle Chapter of PBS felt that Spinnaker was an ideal location to host the official release party as it is a female-owned brewery.  Although this brew was to celebrate women in beer, both men and women are encouraged to join the party!  Proceeds will go to the Pink Boots Society, an international non-profit organization comprised of more than 1,700 women working in the beer industry with the mission to empower women beer professionals to advance their careers through education.
Here are the official descriptions of each Unite Red Ale:

The Seattle Chapter of the Pink Boots Society was officially formed just three months ago and have hit the ground running with this collaboration and other fundraising projects.
The Unite Red Ale Release Party this Friday, April 10th, will include a food truck, raffles throughout the night, and of course, lots of delicious red ale served up by your local beer gals!  Tasters will be $2, pints will be $5.
Spinnaker Bay Brewing is located at 5718 Rainier Ave S. Seattle, WA 98118.
Posted by Adam Duerfeldt at 2:24 PM