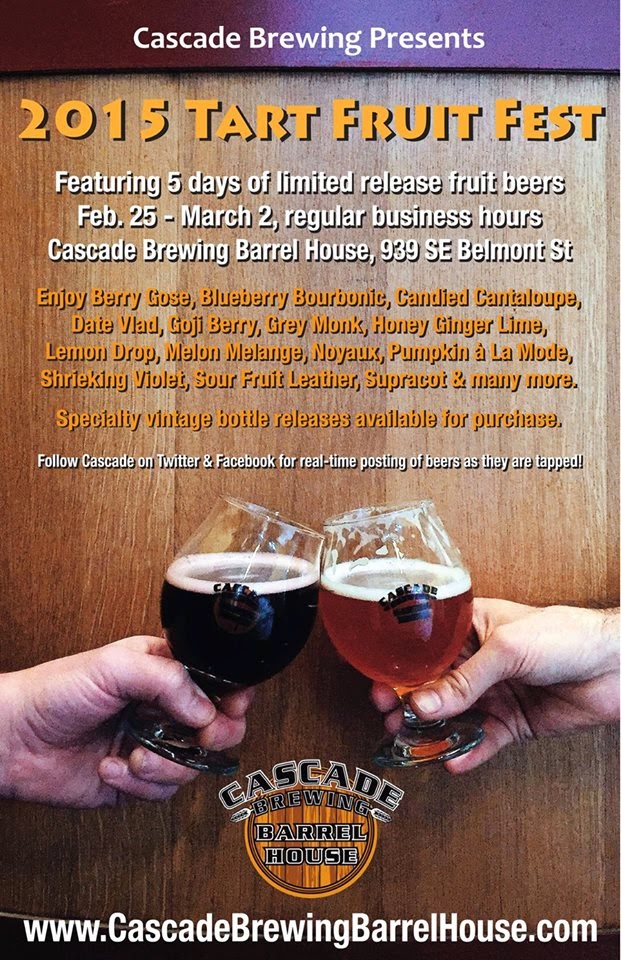 Press Release:
PORTLAND, Ore. – Feb. 6, 2015 – Cascade Brewing, a pioneer of the Northwest style sour beer movement, has announced the dates and lineup of its annual Tart Fruit Fest. This year’s event will launch on Feb. 25 and run through March 2 during regular business hours at the Cascade Brewing Barrel House, 939 SE Belmont St.

Many of the beers are limited in availability and will not last long; the brewery will post to Twitter & Facebook when taps change out. There will also be a number of vintage 750ml bottled products for sale. Additionally, two taps will be reserved for Portland Pale and Cascade IPA for those looking for a non-sour option.

There is no admission cost for the Tart Fruit Fest. All beers will be served in standard 8oz and 2oz pours, with the exception of 4oz pours for select vintage beers; prices will vary depending on the product.

Tart, barrel-aged beers are an emerging beer style and Cascade Brewing is recognized worldwide as a leader of the movement. The artisanal brewery refuses to be bound by stylistic guidelines, instead focusing on the imagination of its brewers and blenders and the ingredients they can access. Cascade was recently named one of the top 100 brewers in the world according to RateBeer. Pucker up and join the sour revolution
For more information, visit www.cascadebrewingbarrelhouse.com or call 503-265-8603.