Barley Brown's So Good But So Far Away

A couple weeks ago Emily and I and our daughter traveled to a gymnastics meet in Boise, Idaho. Instead of flying there, we decided to make the seven hour drive.  As soon as I heard we would be going to a meet in Boise I knew that (if we drove) this would be my first chance to stop in at the famous Barley Brown's in Baker City, a small town of about 10,000.

After parking right out front, I jumped out ready to drink some of the excellent Barley Brown's beer. Walking into the production brewery's taproom I was stunned that it was just me and the server at the bar....on a Friday afternoon! Now I know Baker City is tiny and I assume that many adults in Baker City might not be as persuaded to drink craft beer and all, but this is Barley Brown's, 2013 GABF Small Brewery of the year, with numerous awards for their catalog of beers . As I walked up to the bar I had to laugh just a bit....if Barley Brown's transplanted themselves up to the Portland area they would be slammed at all hours of the day. The tasting room is nice and open with a long bar with plenty of seating, with other tables around. The tasting room has a nice warm feeling to it with lots of wood and high ceilings. You can see the 20bbl brew system from a window


After inquiring with the server about kids entering I was bummed to find out that no one under 21 is allowed in. That was disappointing because I really wanted to sit down with Emily and have sampler tray of as many beers as I could drink and then a freshpint of any one of the 21 beers that were on tap and of course allow our daughter to get out and stretch her legs and get something kid friendly to drink. 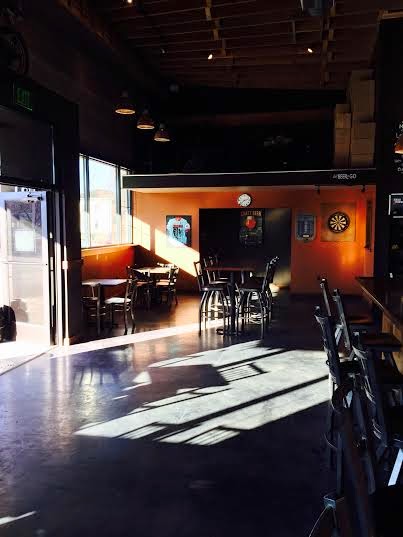 But no worries,  I grabbed my trusty Hydroflask growler to get a fill to take on our way. Note that Barley Brown's original brewpub location is across the street and is family-friendly but it didn't open until 4pm, and we didn't have that much time to wait until it opened. So with growler in hand I was back to the bar trying to make a decision on beer fill...which is hard when you have 22 taps of Barley Brown's beer to choose from, even when you've had quite a few of them previously. In the end I chose my current favorite IPA, Pallet Jack, to take on the road. I just couldn't pass up getting some fresh IPA. I also grabbed a couple bottles of Chaos which is an Imperial CDA and also happens to be the first beer bottled by Barley Brown's.

After I paid I snapped a couple more pics and we were off down the road to Boise, Idaho. I hope to make the long but beautiful drive out to Baker City again so I can experience some samplers and a freshpint of one or two of their fine beers and just enjoy the warm feeling of the tap room. If you find yourself out in the far Eastern Oregon area of Baker City, make sure you stop in at either Barley Brown's BrewPub or Tasting room and enjoy some of the best beer being made in the United States - you won't regret it.

Here is a great older review of the original location from our friend John Abernathy/The Brewsite and the future production brewery/taproom.

Posted by Adam Duerfeldt at 7:38 AM