Gymnastics season has started for my daughter, Cate, which means I'm on the road with the family most weekends. One major upside to all this driving around the Pacific Northwest is that I have the opportunity to try lots of breweries I might not otherwise have occasion to visit.  This year is no exception, but you might not realize it because I have been seriously behind posting my stops.  Those of you who've known me for a while know that the main reason for starting Freshpints.com was to keep all my friends up to speed on my beer-sampling adventures, in a more coherent way than blasting group texts to my entire contact list (as was my practice for years.) So, with this post I'm catching up to myself, and therefore all of you, by beginning to clear out my brewery backlog.

I'm going to start by telling you about our recent weekend in Tacoma,WA.  We drove up from the Portland area during a nasty snowstorm.  Fortunately the roads were clear once we got north of Clark County but it was not an easy drive.  So once we arrived in Tacoma we realized we were starving, and not being willing to continue driving around any longer, we found ourselves wandering into a familiar restaurant near our hotel,  Rock Wood Fired Pizza & Spirits. We've been to the one in Vancouver,Washington a few times but this was our first time at the Tacoma one - it's pretty much exactly the same at both places. The food was decent and my kids were happy to get some pizza in the belly. I (of course) had the taster tray.  And the beers are ok, nothing really out there or too unique though.  The promotional materials on the table and on their website said they have a brewery, but I didn't see a facility or any evidence of a brew operation so I asked the waiter who does their brewing. He said they do it themselves, but I'm pretty sure they contract out with a local brewery.  Does anyone know? Just curious.

After we checked into the hotel we decided to make a quick run and check out a couple other breweries, Tacoma Brewing Co and Wingman Brewers.

First up was Tacoma Brewing, a cool little nano brewery in downtown Tacoma. The space is pretty funky, kind of like maybe it used to be a coffee shop or a used bookstore and retained some of that atmosphere. Since Emily and I were just dropping in we didn't know that they were having a Wood Aged Beer Fest. Lucky us!  All the beers they had on tap were therefore wood-aged beers, so we didn't get a chance to try out any of their regular stuff.  Also, since they were serving special beers there was no taster tray was available. No problem - Emily and I just picked 2 beers off the list and checked out the space. We had Sugar Maple Aged Rye IPA and Spanish Cedar Aged Rye IPA. Both were really good and I plan to be back to check out the regular beer lineup soon. 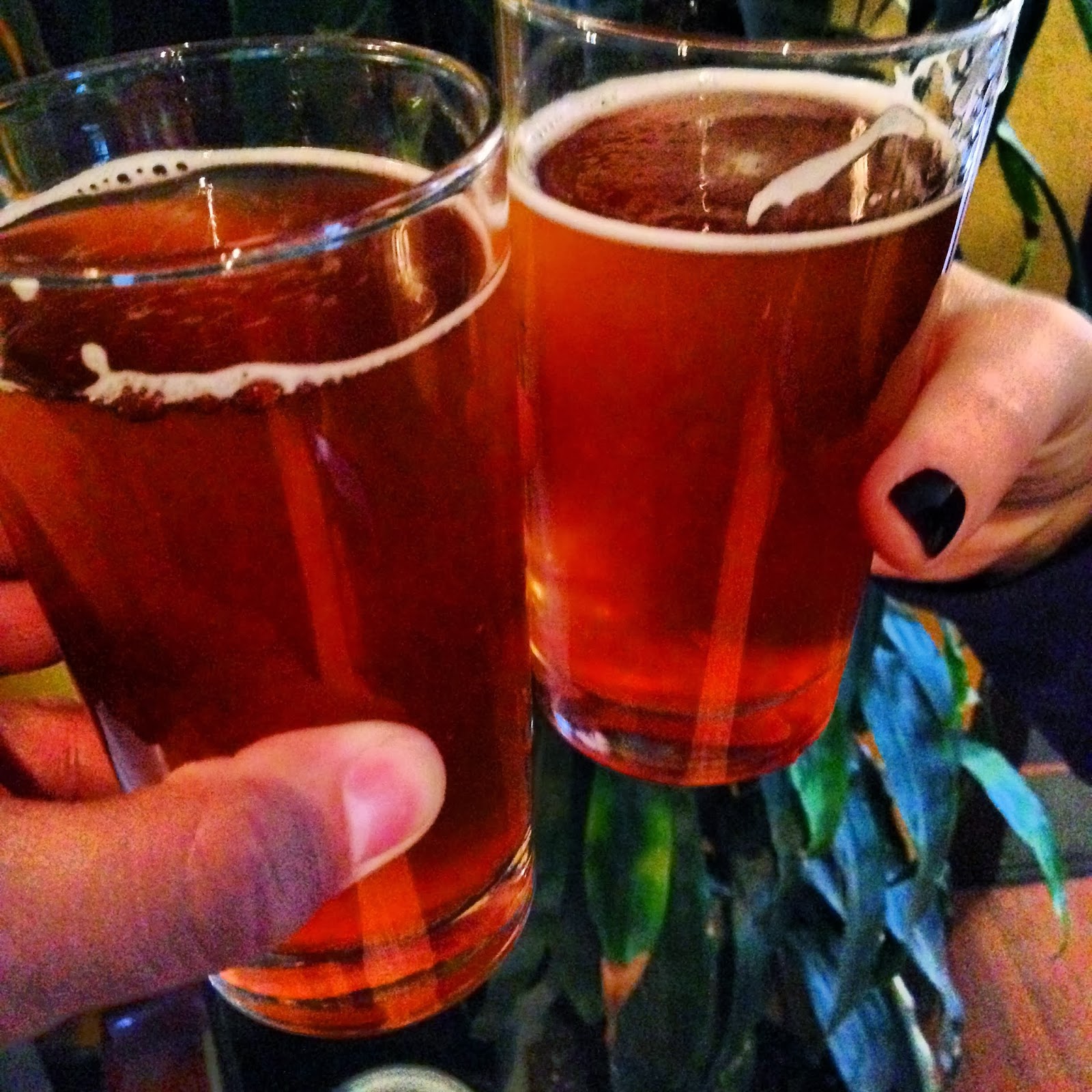 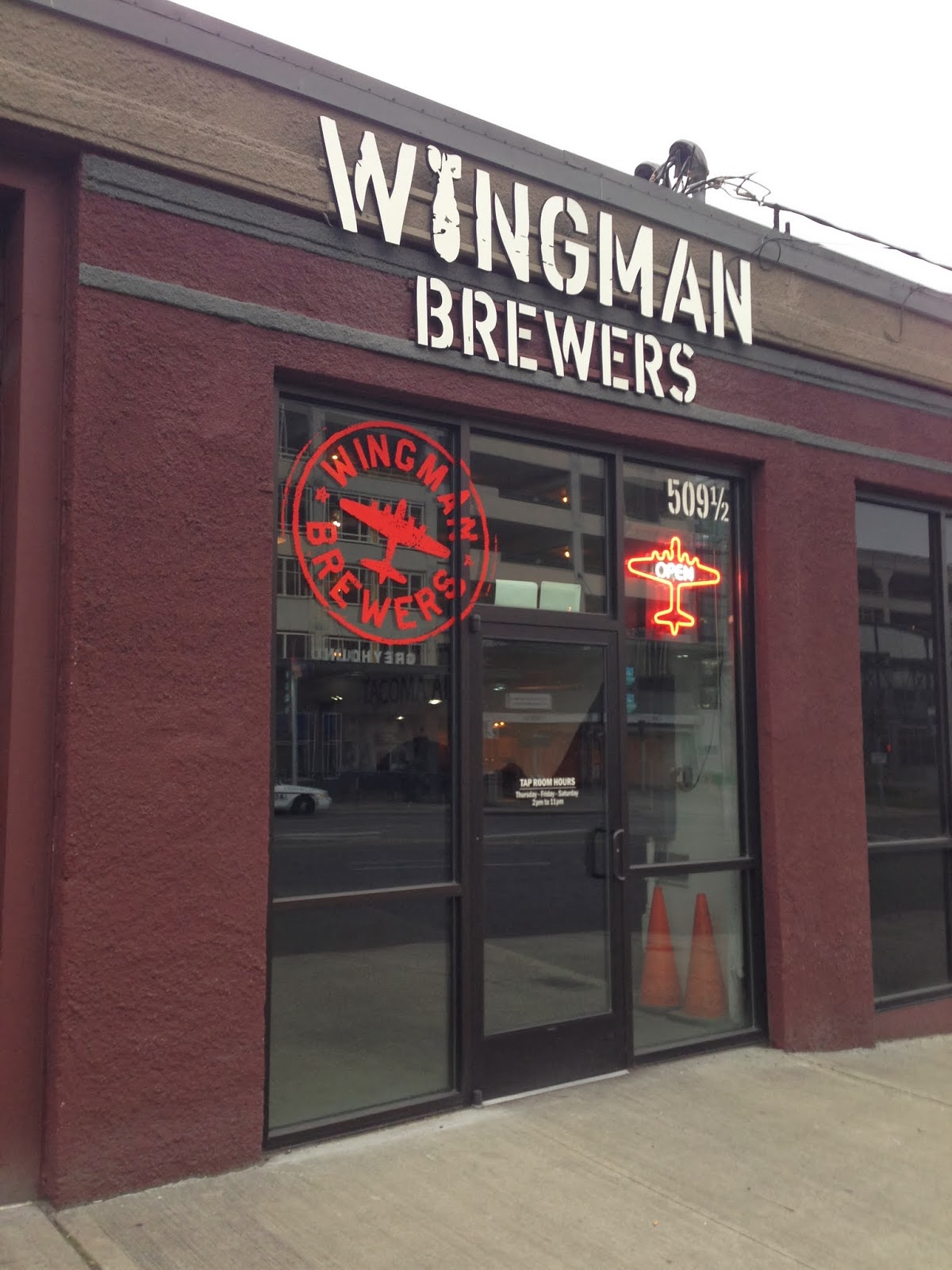 Next up was Wingman Brewers, which is a few blocks past downtown Tacoma in an industrial area, but it's still really easy to find.  Wingman Brewers is a production brewery with a tap room....which just happens to be my favorite type of brewery to visit. As luck would have it, they were brewing when we showed up- nothing better than the smell of beer being brewed while you sit down to sample!

Wingman Brewers started out as a nano brewery (1bbl) and have since upgraded to a 7bbl brewery with 15bbl fermenters & 15bbl bright tank. They still use the old 1bbl system for test batches. Emily and I shared a taster tray of all the beers they had on tap, plus the guest tap. 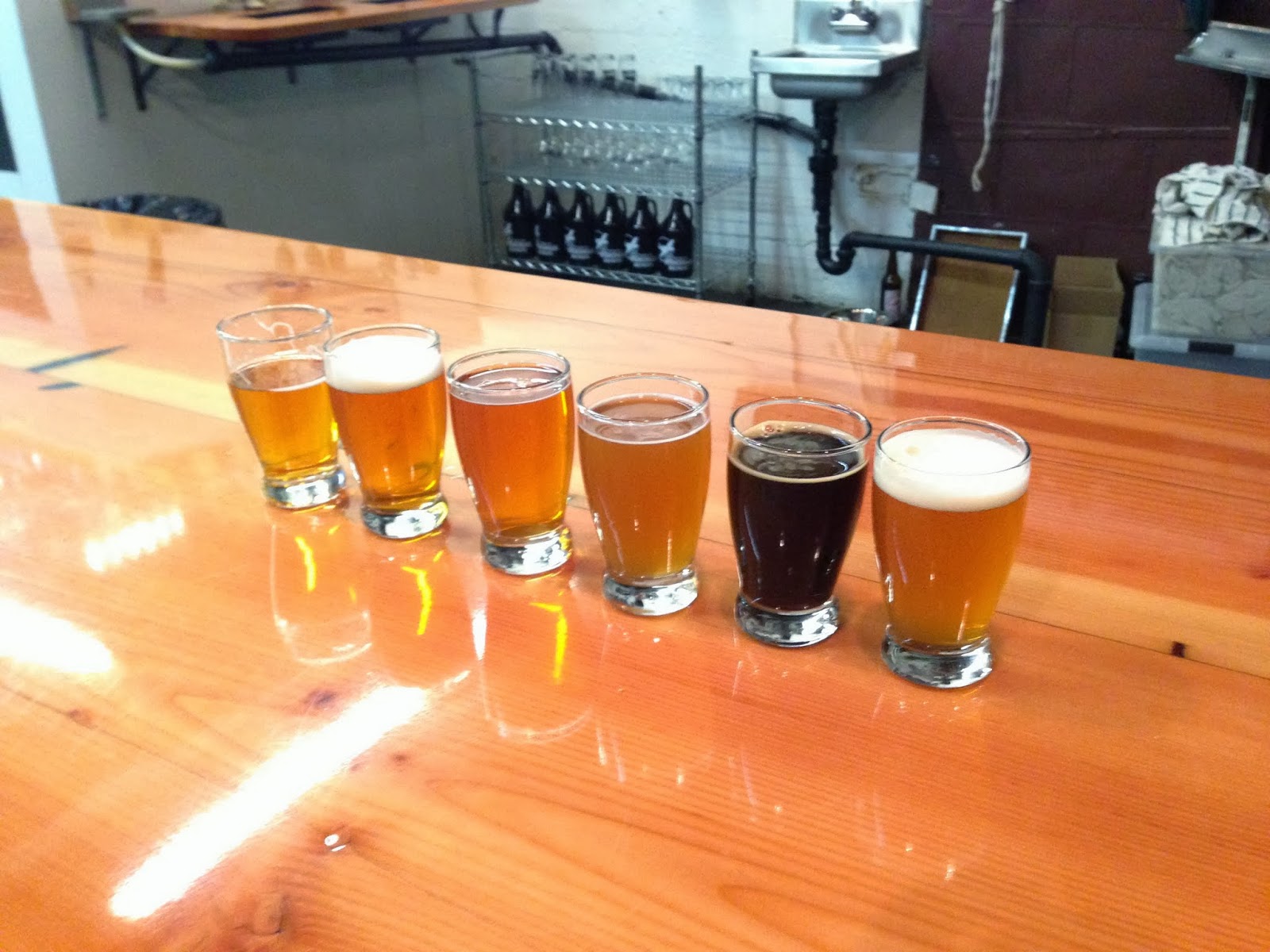 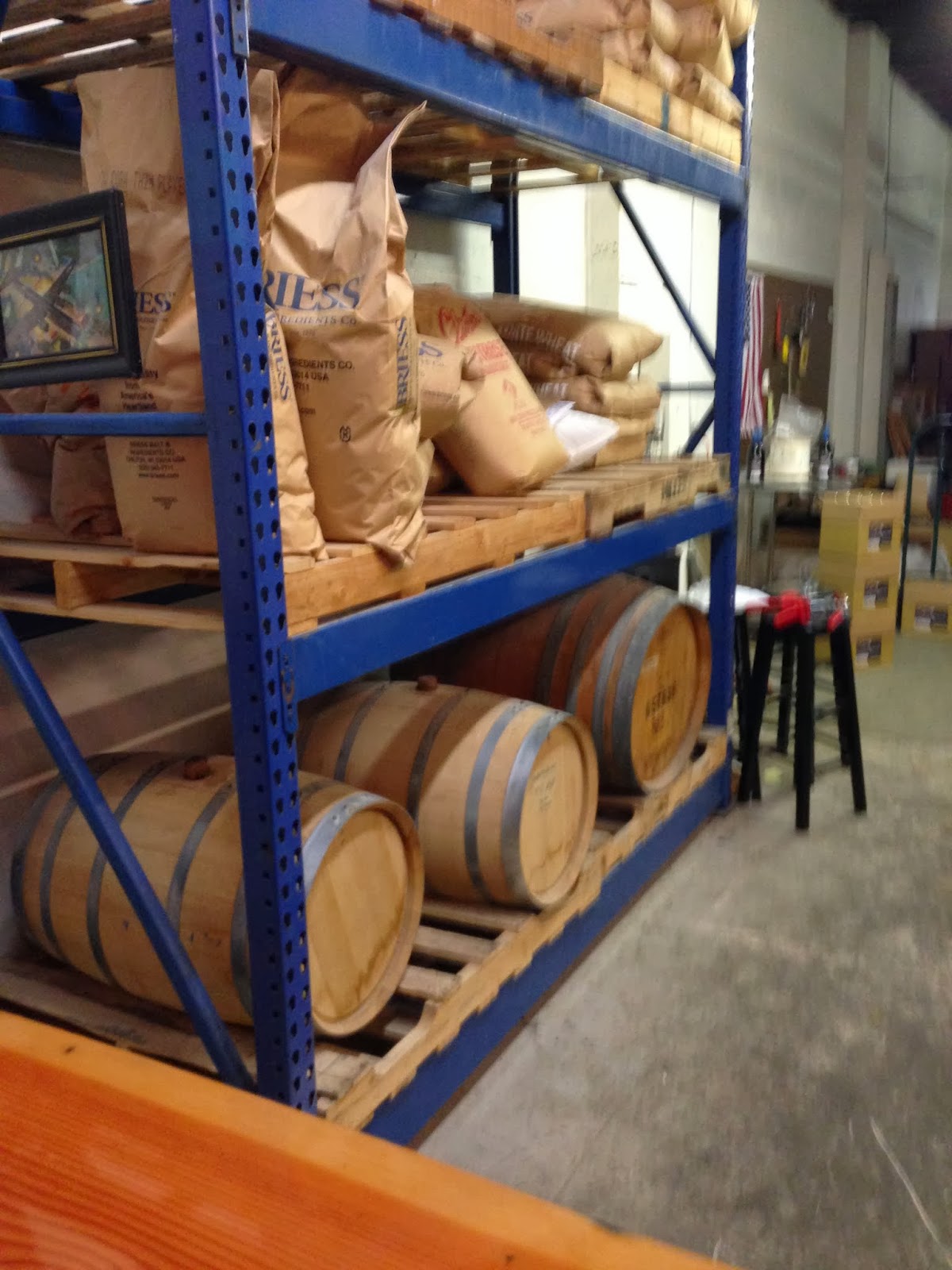 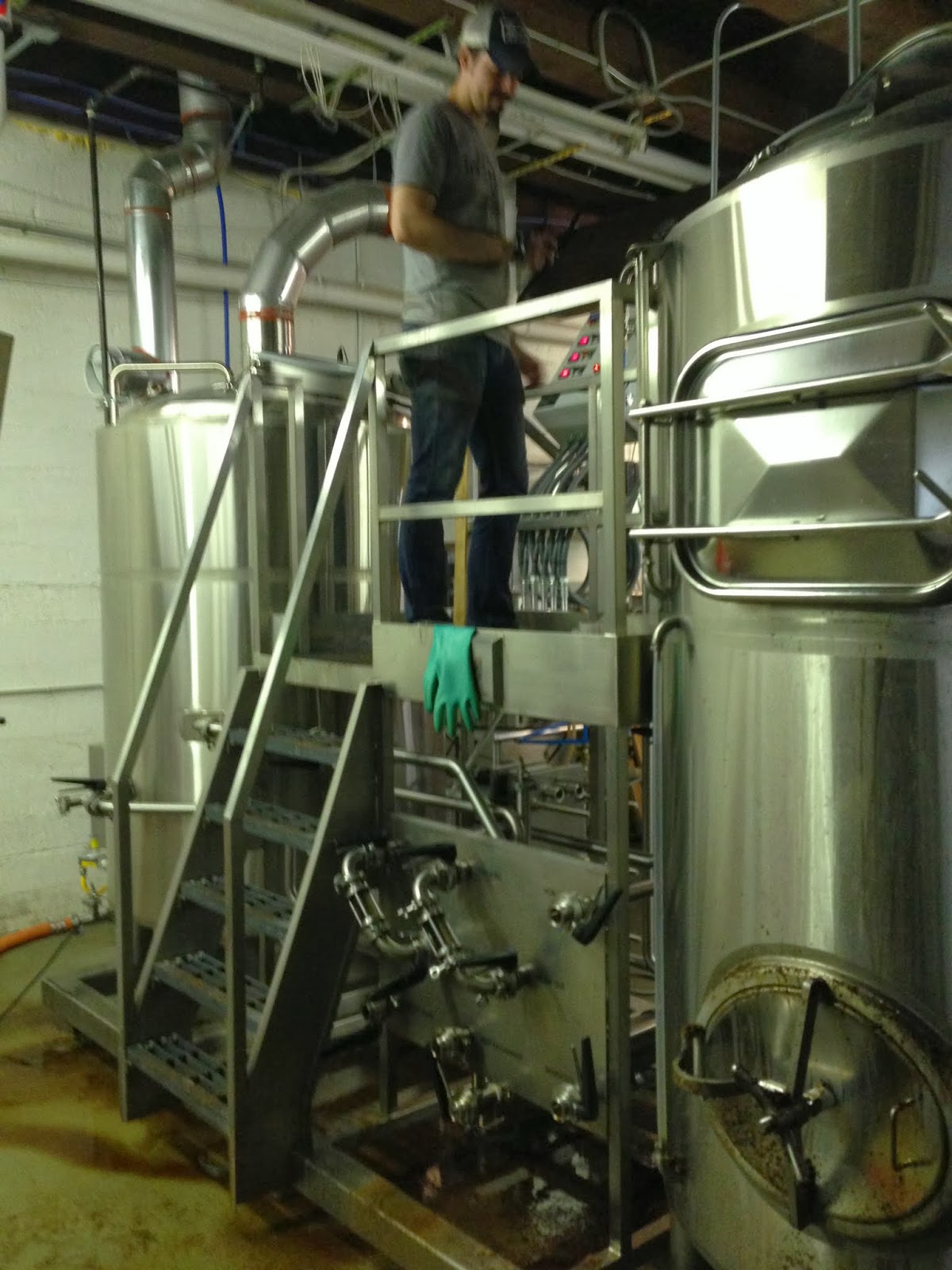 I've had the P-51 Porter before (and it's good) but it was great to try out the rest of their beers. The standout beer for me was the Single Hop Centennial IPA, just a great beer. But all the beers were really tasty -I would drink any one with out hesitation. Thanks to Colin, who was manning the bar, for taking Emily and I on a quick tour of the brewery. We appreciated hearing more about the operation, the history, and the specific beer they were brewing.  On the way out we picked up a couple cans of the Ace IPA, a bottle of the Big Baby Imperial Stout, and a couple of t-shirts. If you're in Tacoma you need to stop in and check them out.  It's a cool little brewery with great beer and nice people.  Emily says this one was her personal favorite in Tacoma because not only was the beer really good, but the people were cool and she liked the more industrial feel of the space - the bar is just a few feet from where all the magic happens.  She also picked up a shirt for herself and when she can add to her beer-wear collection she's pretty happy.

Our last stop for the night (and then we went back the next day before leaving town) was Harmon Brewing.  Tacoma's first brewery, Harmon Brewing has been brewing on 15 bbl system and serving up food in downtown Tacoma since 1997. They also have two other locations in Tacoma, the Hub and the Harmon Tap Room. I haven't visted those locations but I have been to Harmon several times now.

Many years ago I stopped in with a friend for the first time after a long weekend making the rounds of breweries in Seattle. Since Harmon is right off I-5, it was easy to make a quick detour on our way back to Oregon. I don't remember much about the visit since it was so many years ago, but my impression was positive so we now visit pretty much any time we're in Tacoma.  Each of the last three years we've had a gymnastics meet right down the street at the Tacoma Convention Center, so it's the perfect place to grab lunch or dinner with the family after a competition. One thing that I can always count on is that they have great food for the kids to eat.  As a parent this is always a concern, especially if you have picky eaters like ours. They also have great pub style food for the adults - Emily and I haven't had anything we didn't like yet, and some of the stuff (like the nachos) is so good it's easy to way overdo it.

Also, the downtown location is pretty big.  We brought some friends along to lunch with us and they had no problem quickly seating all nine of us together.  With five kids in tow, that was really nice not to have to wait around for a table.

You will find great beer at Harmon, of the usual styles: IPA, Porter, Pale, Blonde,and ESB. But I really enjoy the seasonal beers they have on so I usually gravitate toward them instead of the regular beers. The first night I just had the taster tray since it had been a year since the last visit. The second night I had the Stryker Stout and the Single Hop IPA, both excellent beers. We had a great time at Harmon and it was fun having our friends check it out for the first time as well. Harmon Brewing is a great choice for family-friendly food and beer in downtown Tacoma.
Harmon Brewing Co. Website
Harmon FB page
Harmon Twitter

Downtown Tacoma has a lot going on you might not realize.  It's got some cool museums, great dining options, public artwork, and best of all some cool breweries to check out. Next time you're in Tacoma or passing by, take a detour to one of the great small breweries Tacoma has to offer.
Posted by Adam Duerfeldt at 9:44 PM