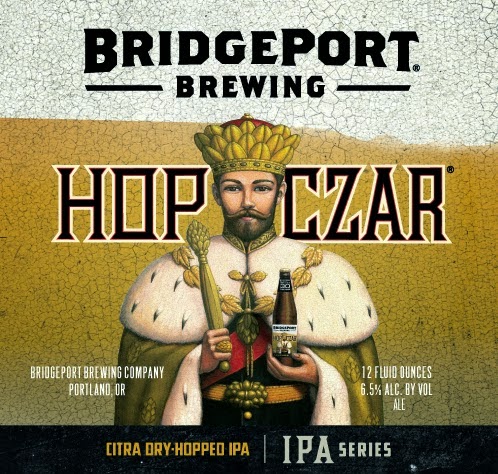 PORTLAND, Ore.—February 25, 2014 —BridgePort Brewing Company, Oregon’s oldest craft brewery, has added a new Hop Czar IPA Series to its lineup of handcrafted brews. The original Hop Czar Imperial IPA, first released in 2008 as a limited edition brew, was an adventurous and boldly hop-centric brew for BridgePort. But as the enthusiasm of hop-happy beer drinkers grew, it quickly proved to be much more than a niche ale. Hop Czar soon became the brewery’s co-flagship beer. Inspired by the original Hop Czar’s legacy of experimentation, the Hop Czar IPA series will feature three hop-forward craft beers, each brewed in Portland and released sequentially throughout the year. “The original Hop Czar was born out of experimentation, pushing the limits of hoppy flavor and aroma,” said Jeff Edgerton, BridgePort’s Brewmaster. “With the new Hop Czar IPA Series, my brewers and I have the chance to continue experimenting with the Willamette Valley’s incredible hop varietals to create three new and innovative IPAs this year.”
The first offering in the series is the Citra Dry-Hopped IPA that showcases the intense aroma and flavor of the Citra hop varietal.  This new brew adds a decidedly American twist to a British original, combining the complexity of English malts with a heavy dose of Citra hops from Oregon’s Willamette Valley.
While Edgerton and his team of brewers will create three adventurously hoppy IPAs in the spirit of the Hop Czar Imperial IPA, it doesn’t mean that the original recipe is gone for good. Edgerton continued: “It may return in its original incarnation, slightly modified, or completely overhauled. It all depends on what we learn from our experiments with other regional hop varietals and how our fans respond to the new ales.”

About Citra Czar
IBUs:      60            ABV:        6.5%       SRM:       20            OG:          15.6
Ingredients: The Citra Dry-hopped IPA contains Citra hops for a refreshingly forward citric taste and English malts for a more sweetly balanced flavor.
Description: With slightly lower alcohol content and bitterness than the original, the Citra Dry-hopped IPA is a smooth and approachable ale, featuring a range of complex background flavors.
To taste this first release in the Hop Czar IPA Series, visit BridgePort Brewery, located at 1313 N.W. Marshall Street in Portland, Oregon or look for it wherever BridgePort beers are sold.

About BridgePort Brewing CompanyCelebrating 30 years in 2014, Oregon's oldest craft brewery continues to evolve from a microbrewery to a regional leader committed to producing high quality craft ales. Lead by Brewmaster Jeff Edgerton, the team of BridgePort brewers prides itself on using hops from an hour away and clear glacial water from Mount Hood. The BridgePort family of ales includes IPA, the Hop Czar IPA Series, and Kingpin.  BridgePort Brewery is located at 1313 N.W. Marshall St.  For more information, call 503-241-7179 or visit www.bridgeportbrew.com.