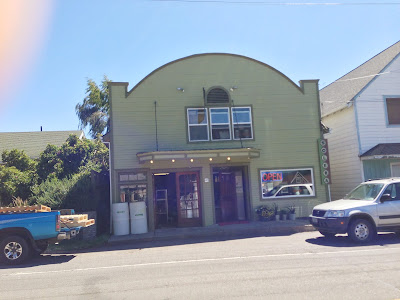 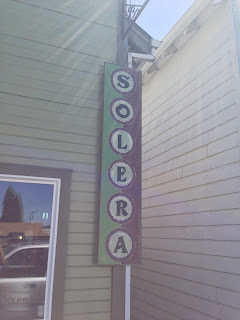 My wife and I dropped by Solera Brewery on our way back from a Bend trip this summer. Solera Brewing is right off Highway 35 in the tiny town of Parkdale. Many, many years ago we visited the Elliot Glacier Public House and Brewery which used to occupy the same space. I can't remember much about Elliot Glacier other than I didn't think the beers were very interesting, the space was pretty unremarkable and no one was there other than us and the bartender... so I suppose it's not at all shocking don't have much of a memory of the place.  A couple of years ago it finally closed and was sold to former Big Horse Brewer Jason Kahler and business partner John Hitt.  They renovated the historic building and added a new 7bbl brewery.  I figured I'd have to give the new brewery a try and see if it would succeed in creating an impression with me.
At first glance and when you walk in it feels like an old western saloon with lots of wood and a huge bar. When we arrived it was packed, with no seats at the bar and most tables taken. Not a problem, since I really just wanted to grab a taster tray of their beers and head out back for one of the most incredible views of Mt Hood that you will see.  We lucked out and were able to snag one of the last seats at a table on the back patio.  Great setting to enjoy a taster tray of six Solera brews. 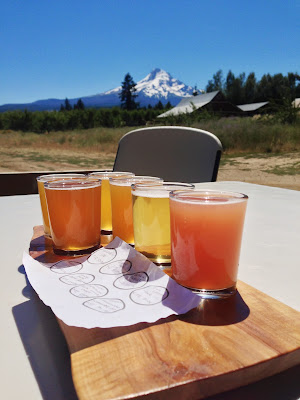 The beers were all really good. On tap that day was Hedonist IPA, Devil's Food Imperial IPA, French Tickler (Saison), Plum Crazy (sour), New Breed ISA, Vaudou Dame (Voodoo Lady/saison).  All the beers were really good, but there were a couple standouts. We both really enjoyed the Plum Crazy sour (wife's favorite) and the Vaudou Dame.

The setting outdoors is really casual, which you'll either love or hate.  The tables and chairs are plastic fold-up (you can kind of tell from the pictures.)  The local guys sharing the patio with us were a little too rowdy, and their dogs were running around loose play-fighting.  No servers came out to see if we wanted or needed anything, so it's almost got a vibe like you're out in someone's back yard more than you're on a patio at a legit pub.  Thankfully the view totally makes up for those shortcomings.
If you're out that way for some hiking while the weather is still good or driving through on highway 35 to another destination, stop in. My impression? It's a cool little brewery with great beer in a cool little town and on a clear day the view of Mt Hood is amazing - truly remarkable.

Posted by Adam Duerfeldt at 5:23 PM