I'm old... I've been going to the Oregon Brewers Festival for 20 consecutive years, including the year of my oldest child's mid-July birth. So, yes this was my 20th time visiting Tom McCall waterfront park to drink beer midday, midweek. I only go on opening day, and I arrive to get in at noon with my friends and then start sampling beers, thereby to miss the crowds.  Since I dislike lines and crowds, this tactic has always served me well and made for  enjoyable beer-sampling conditions.  This year, wonder of wonders, the wife managed to remember to get the day off of work so she, my brother, a couple of buddies and I ventured down together for a relaxing afternoon of imbibing.

This year there were a couple of notable changes, one being that it opened on Wednesday. That really seemed to make a big difference in the crowds, which as noted, I avoid whenever feasible.  Happy!  I noticed no lines to get beer pours and the who-oo-ooing (if you've been, you know!) also seemed to start later and recur less often...thankfully!  I think that adding the extra day really helped spread the attendance and keep the crowds down.  At least it did opening day, and that's really all I care about!

Another big change was getting rid of the plastic taster mugs and going to the 12 ounce glasses. That was a really great change - the beer tasted better, you could actually smell the beer, etc.  Though the pours were smaller, I didn't mind because I was actually able to taste more beers. Thank you OBF organizers for making the change to glass!  Well done, please don't revert.

A couple other changes: First, the Buzz tent was not part of  OBF 2013 - a bummer to be sure, but it sounds like it will be back next year.  Second, the open area under the tent but before the beer lines on the south side really seemed to make the crowd-flow better on that side.  All in all the changes really seemed to make OBF 2013 better. 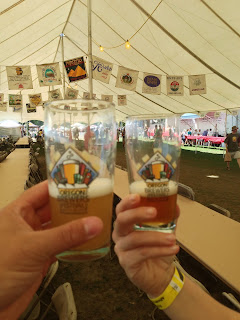 On to the beer tasting!
Winners for OBF #26, in my opinion, in no particular order!
A couple other beers that were good:
There were a few duds in there as well but out of the 38 or so beers I tried (it was a productive day), most were pretty good. And some, like the 7 above, were really great.

I think that with the changes made to the OBF this year and the great selection of beers it was one of the best OBFs that I've been to in years. My wife thinks it's because she managed to attend, but... Cheers to the OBF folks!

FULL DISCLOSURE: I was comped my taster glass and my tasting tokens, as a media person. 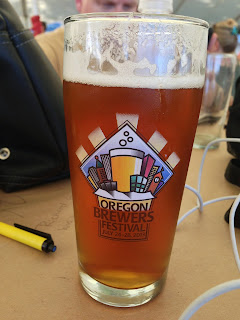 Posted by Adam Duerfeldt at 9:17 PM