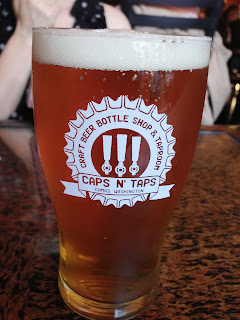 A new bottle shop and tap house called Caps N' Taps opened recently in downtown Camas,Wa. My wife and I went down and checked it out a few days after it opened and have been back a few times since.  The space is pretty cool, kind of dark inside with wooden floors that give it a pub vibe.  There's an open seating area with tables and comfortable chairs near the front by the windows.  The bar is in the back.  There are 20 taps with a decent selection of beers, though nothing I haven't tried before. It would be cool to see them branch out after they get a  bit more established.  There are a couple refrigerators with bottles for sale, and more bottles on an open shelf. Again, good basic choices but nothing really unique.  When we first visited Caps N' Taps, they had free snack mix available but no real food options.  But when we went back last Friday, we saw they now have a menu with some basic pub-style fare.  We hear the food is made at a nearby restaurant and then brought in, but we didn't ask.  The service has always been very friendly, even though it's been pretty busy when we've been there.  We will probably make Caps N' Taps a regular stop.  It's great to see a new beer business up and running in Camas
. FB page, Twitter
Posted by Adam Duerfeldt at 8:31 PM