Two weeks ago I went to the Oregon Gardens Brewers Dinner and Brewfest in Silverton.

My wife and I left for Silverton early in the afternoon on Thursday, and arrived around 4pm at the Oregon Gardens.
The Oregon Garden Inn is a boutique hotel and is very quaint. The actual guest rooms are not part of the main hotel building, but are clusters of rooms in cottages nearby. The rooms are very cozy, with either a private deck or patio, fireplace, a.c, etc. The room was perfect for my wife and I.
Back in the lodge they had a nice size bar/lounge off to the left as you walked in the front door. And not surprisingly they had some great beers on tap....I had a couple Goodlife Sweet As pales and my wife had a couple of Double Mountain IRAs. We also had some appetizers to fill us up (Buffalo & Blue Cheese Potato Rounds and Chicken Nachos) as we figured we might need some food before heading into the Brewers Dinner and drinking even more beer. 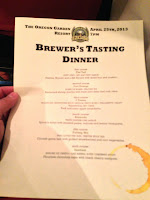 After all the years drinking good beers and traveling to breweries, this was my first time going to a brewers dinner, so I was pretty excited. I'm happy to say the The Oregon Brewers Dinner , 6 courses with beer or cider pairings, lived up to my expectations.


First course - Cheese plate which consisted of Fontina, Boursin, and Dill Havarti with dried fruit and crostini. The beer pairing was from Flat Tail Brewing, a blend of Pre-Prohibition Pilsner with Peach Sour.  The beer was very light and a bit fruity, so paired well with the cheese. (The cheese course was substantial. I could have filled myself up with the cheese and been done with the dinner.) 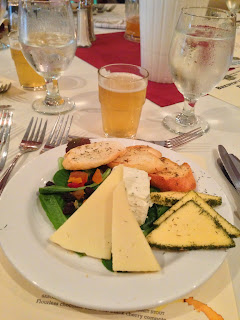 Second course - Blackened shrimp martini with fresh pisco salsa and crab meat. The beer pairing was Ft George Brewing Roses on Roses-Belgian IPA. This was a big beer and I really liked it. The shrimp and crab martini was really good and I ate two since my wife was pretty much full by this time. 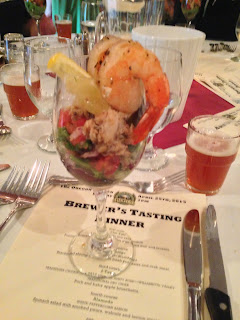 Third course -  Pork and baby apple bruschetta paired with Two Towns Ciderhouse/Traditions Ciderworks Vintage Amity Rose.  This was one of my favorites, and my wife said it was her favorite of the evening. This dry, wine barrel-aged cider paired very well with the pork and apples. The other folks at our table were actually some of the guys from Two Towns Cider and Nectar Creek Honeywine.  We had a blast sitting with these guys and I can't wait to visit them down in Corvallis.

No Picture...seemed to have missed taking one
Fourth course - Spinach salad with smoked pears, walnuts, and lemon vinaigrette paired with Alameda Brewing White Peppercorn Saison. The smoked pears in the salad were unreal. I could have just eaten a handful of them minus the rest of the salad. But the interesting flavor of the Saison really brought out the flavors of the salad, and the overall effect was excellent. 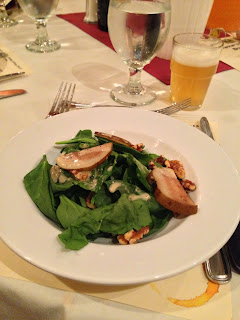 
Sixth Course - Flourless chocolate cake with black cherry compote paired with Santiam Brewing's Sangre De Cristo, an oak-aged Cabernet stout (cask). As you can imagine, stouts and anything chocolate pretty much go well together. The cake was very good and the stout, a blend of beer and  Cabernet Sauvignon grapes (makes up to 30% of the fermentable sugars in the beer), was really good.  Santiam also was the People's Choice winner with its Pirate Stout, a rum-aged coconut stout. 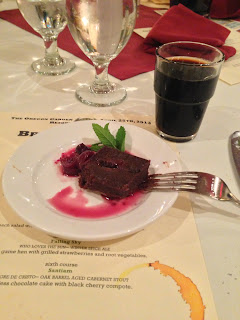 For my first brewer's dinner I had a blast. The food was great, the beer pairings were excellent, the people we met were all very nice. If you can get a ticket to go next year I would say do it.
After the dinner most people (including us) convened back to the lounge for more beer, food, and live music.

The next day we rose late, had breakfast at the resort, and then decided to go into Silverton and check out the town. I don't think that either my wife or I have been in Silverton in probably 15 years or so, and its surprising how much it has changed. The downtown area is really cool. They have done a good job keeping the buildings looking original and it's fun to walk around and check out the various shops. We also stopped in at 7 Brides Brewing and I will have a post on them soon. 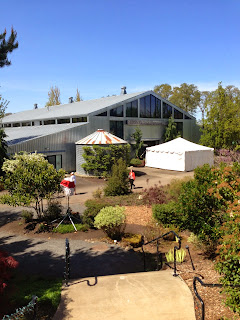 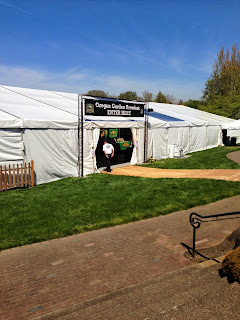 At noon we went back to the Oregon Gardens and picked up our pint glasses and tickets (and bought 10 extra tickets), then walked down into the garden to the brewfest.  They had the pavillion and an extra tent set up with with beer, music stages and food options in each. There were other vendors too, selling things like brewery t-shirts and novelty items (kits to make wine slushies, for example.) From  noon to 2 it was the meet the brewer/rep time. I did see some brewers/reps around at the tables talking about the beer while samples were being passed out, and talked with a couple. Everyone seemed to be enjoying themselves. 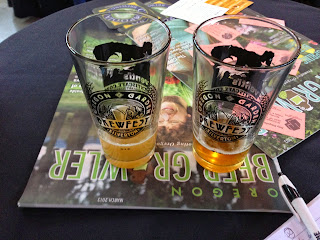 Our tasting strategy was to get samples of beers that we hadn't had before.  In total, I think we sampled 18 beers, meads and ciders in 2oz pours.  Most were new to us.
Here is what we sampled:
Those are the ones that I wrote in my notes....and then by the end I started to forget to write them down. Like I said the Nectar Creek Honeywine Ginger Session mead was the one that really stood out for me. It really tasted great and was refreshing on such a warm day. We had several pours of that one, which is why we sampled fewer beers than we had tickets. (Used up all 20 tickets though!) After we finished up our tasters we decided to hit the road back to Camas.
After taking awhile to finish up this blog post I really think the Oregon Garden is onto something special. This isn't your everyday brewfest in a big city. You have to actually take the time to drive out to Silverton. Its almost like the Oregon Gardens/Oregon Gardens Brewfest is a destination brew vacation. You can drive up either the day before the festival and see the gardens and spend the night at the lodge and be rested for the brewfest, or get tickets for the brewers dinner if possible and then spend the night at the Inn and be rested for the brewfest. Or drive up the day of the fest on Friday or Saturday and enjoy the brewfest and the garden and then stay at the Inn so you don't have to worry about driving home, and then the next day enjoy the little town of Silverton. Or just come up for the day on Friday or Saturday, and if you have kids come on Sunday.  However you do it you will really enjoy the Oregon Garden Brewfest. 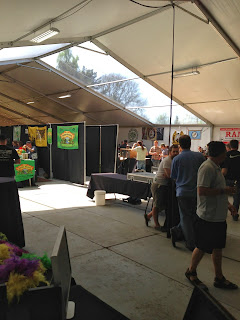