Back in March on a beautiful clear but cold day, my wife and I found ourselves without kids for the afternoon.  Since it was such a beautiful day we decided to take a drive down Highway 14 and hit the new Amnesia Brewing in Washougal.  After Amnesia, we planned to hit a winery further down 14, then backtrack to Backwoods Brewing since it wasn't opening until 3pm. 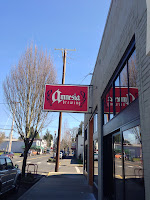 Our first stop in was in downtown Washougal at the newly-opened Amnesia production brewery and tap room. Since I live in Camas, I actually go to Washougal frequently, but usually I go to A Beer at a Time which is in a different part of town. It's impressive to see the changes to downtown Washougal - lots of old buildings being renovated to bring in new business. I remember the old pawn shop that used to occupy the space that is now Amnesia, and wow what a change. The pub space is actually pretty small but is very nice and light with wood booths and a huge L-shaped bar.  They had quite a few beers, both regular and seasonals. I of course ordered the entire taster tray. Like the Portland Amnesia, they offer a small menu of food options. 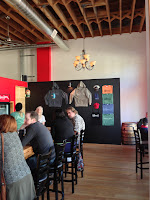 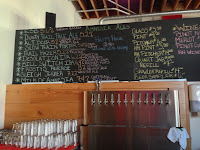 I haven't been to the Amnesia PDX location in forever so it was nice to once again sample the excellent beers that the brewers at Amnesia are putting out. All the beers were great but two really stood out for me, The Trail Hazer (dry hopped pale) and the Milk of Amnesia (oatmeal milk stout). After we finished up the taster tray we were on our way up Hwy 14 in search of the winery.  But it was farther away than we thought, and as we were driving my wife looked over and noticed we happened to be right across the river from Hood River. So right then and there we decided to bag going to the winery and instead make a spur-of-the-moment trip to our favorite brewery and pizza joint, Double Mountain Brewing..... Once again I'm sounding like a broken record, but Double Mountain is one of the best breweries in Oregon - the beer is excellent and the pizza is out of this world. 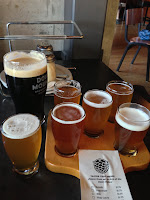 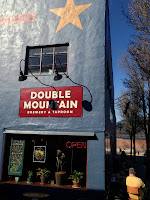 So we ordered a nice big pizza to nosh on and my wife enjoyed the Black Irish which is a Dublin-style nito stout and I had a taster tray of the seasonals which were the White Rider of Conquest (Belgian style-strong Pale), Red War (Belgian style-strong Red), Black Famine (Belgian style-quad), Molten Lava (Imp IPA), and Project 48 (dbl IPA).
After relaxing for a bit and finishing up our beer it was time to hit the road and head back home towards Backwoods Brewing.
Backwoods brewing really is a bit backwoods.  It's in Carson, which 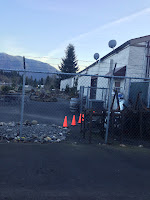 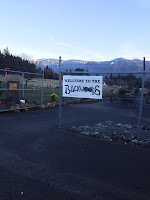 is off Hwy 14 a couple of miles. I would imagine that unless you live there or are doing some sort of outdoor recreation during the warmer months you might never go through Carson. Backwoods is actually behind a grocery store/post office. If you are using navigation it will put you in the front of the building, so just keep going around to the back and you will see it.  Once you walk in, you instantly feel comfortable. The pub has a friendly rustic vibe. We went straight to the bar and ordered a taster tray of all the available beers and some stout-braised brisket nachos. I was expecting beers that were a bit raw and maybe not so good, since they're a new brewery. But I was pleasantly surprised. All the beers were really tasty and the nachos were good as well.  The beers that really stood out to me were the Clear Cut pale, Ridge Run Stout, and the Log Yard IPA. 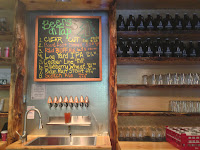 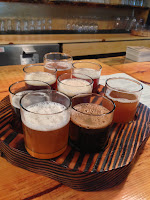 With the established breweries (Walking Man and Everybody's Brewing) and now Amnesia Brewing and Backwoods Brewing, plus a couple of new-comers (Railside Brewing and Acadian Brewing and soon-to-open Mill City Brewing) now you can do a nice little Hwy 14 brew tour.