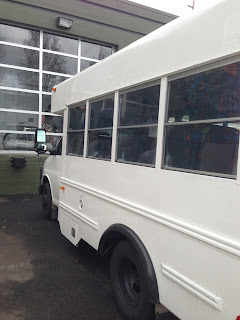 Recently I was invited to a birthday party on the Brewvana Portland Brew tour co bus. This was a first for me and, I believe, everyone else on board.  I have seen the tours come in when I've been at breweries and I have seen Brewvana shuttling people around for various beer events. Truth be told I was a bit skeptical that it could really be worth it. I can just drive myself to whatever brewery I want and the costs associated with the tour seem high relative to the amount of beer you get...but by the end of the tour my mind was changed.
We got picked up in Camas at the birthday person's house, by an unmarked, white short bus that looked a little like jail transport from the outside. But inside it had a cool mural on the ceiling, rope lighting, a small fridge in the back and cup holders on the seats. Our driver was Nikki who was super nice. In this line of work I assume you really need an outgoing personality and she was great, chatting with us like she knew us right from the start. We got our Brewvana glass, pretzel necklace, and beer journal and were on our way into Portland for the first stop at one of my favorite breweries, Base Camp Brewing.

We rolled right to the front door at Base Camp Brewing and since Brewvana has contacts with all the breweries, you bascially walk in and beer is waiting for you.  They cleared some tables for the goup and brought out a stack of taster trays, one for each of us. Joey from Base Camp came over and talked with us about the beer and whatever questions we had, and since we had a lot, they spent a good deal of time speaking with us. Then after finishing up the taster trays we got a tour of the brewhouse. Base Camp was defintley the highlight of the tour. The beer was awesome and Joey was a great host - the best of the tour, in my opinion.
Next up was Breakside Brewing which I have also been to many times. Just like Base Camp, Breakside had a table ready for us so as soon as we sat down we had taster trays delivered. As part of the Brewvana tour, food was preordered so that came out pretty quickly after we arrived.  The food was all served family style. The assistant brewer came over and gave us a very quick "Hi" and said these were the beers he picked for us, hope you enjoy....I'm not sure if it was how busy it was that night or if the food stop in the tour is usually set up this way but I think a little more attention from the brewer or anyone on staff about the beer would have gone a long way. Also I would suggest ordering a ton more food prior to the tour or pay for extra stuff on your own as you go. There wasn't enough food to go around and I promise you will need it to soak up the beer (just ask my wife.)

Next and last stop on the tour was Upright Brewing, another brewery I have visted previously. And wow I was surprised at how busy it was considering it was Sunday night. At this stop we got one full beer instead of a tray and were supposed to do some beer trivia. It looked as if only one person/employee was pouring beers, so there was no attention from Upright staff, or any info provided about the brewery.  Basically we just picked a beer, it was poured, and then we just wandered around a bit checking out the space. I didn't see any beer trivia and honestly with  no place to sit as a group (all seats were taken by other patrons) it really wouldnt have worked out anyway.

All in all I had a great time and I think everyone else did as well. Now I get the value that Brewvana gives you: with Brewvana's connections they can offer all sorts of different tour options, so there is something for everybody, plus you get a cool driver to haul you around while you drink too much with your friends.  Nice!
I hope to "Hop on the bus!" sometime in the future and I think you should as well.
Brewvana is having its 2nd anniversary at Base Camp brewing on April 5th 6pm to 10pm, and it's a free event! Brewvana 2nd Anniversary Party