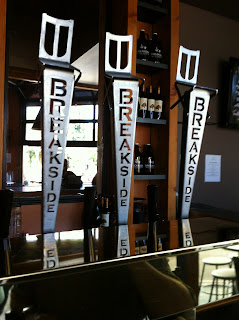 Last weekend, after leaving the Historic races at Portland International Raceway, my friend Casey and I decided to stop in over at Breakside Brewing. I've been to Breakside several times and really love the different styles of beer that they brew, the friendly service, and the pub itself. Place was packed when we got their being that it was a sunny day.  We sat at the bar and ordered a taster tray, and they were out of taster tray glasses being that it was so busy, but co-owner Scott Lawrence who was busy bartending offered to give us tasters anyway in glasses. Very cool and good deal for us as it was substantially more beer. So the beers we had in the taster set where: Just The Tip Spruce Wheat, Hefeweizen, Smokey Radler, Woodlawn IPA, Dry Stout, Old Woody, and a small sample of Bourbon Old Woody.  The IPA and the Dry Stout are from the year round beers and excellent, missing from the year round list Aztec Ale, Witbier, and IPA. The seasonals were really interesting. The Spruce Wheat is a very refreshing wheat beer with just a hint of spruce in it, the Smokey Raddler is a Kolch style beer brewed with scottish peat malt and then chopped lemon peal added as well to make a very refreshing mix of flavors. The Hefe is a traditional bavarian style wheat style beer and was excellent. The Old Woody is an English style ale and the Bourbon Barrel old Woody was the same beer aged 9 months in Heaven Hills Whisky barrels both excellent, but the aged version was unreal.  Talked briefly with Scott Lawrence about the new production brewery/tasting room in Milwaukie,OR and it should be pretty cool with a big jump in brewing capacity with a 30bbl brew system and barrel room, and canning capabilites....this is good news as they do seem to be out of 1 or 2 of their year round releases all the time. If you haven't been to Breakside you should get over and check it out, they have great year round beer, the seasonal's are always really interesting, the food is good with many different options to pick from and the space is really cool with a family eating area, outdoor seating and a bar area. www.breaksidebrews.com 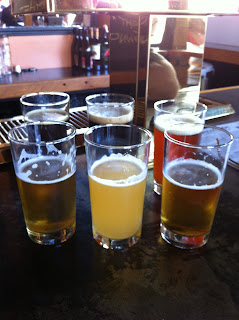